The Review: After having spent more than a decade on the famous "Red" map series, the author Merlijn van Oostrum finally seems to be embarking on a new adventure. In Apocollapse Duke finds himself in a European city as it's attacked by the aliens. The map begins with a stunning sequence whereby Duke first witnesses an entire city collapse in a matter of seconds, then has to escape the destruction himself. The whole sequence feels very cinematic, even if its gameplay side is slightly reliant on trial and error.
The rest of the map is just as stunning but less reliant on elaborate setpieces, which also sets it apart from the Red series. The map boasts the most impressive cityscapes since Anarxiticalcity and CBP 8. There's a lot of scenery beyond the boundaries of the actual gameplay area, providing the map with the kind of depth you've rarely seen even in other usermaps for this game, a game known for its out-of-bounds scenery. The sheer scale of destruction that has engulfed the city is impressive with deep ravines and collapsed buildings everywhere. The author has taken no shortcuts, and thus the buildings that surround you have all been crafted with care to make every last one of them look unique, not just static walls that exist solely for the purpose of defining the gameplay area. Most of the map's indoor action takes place in a mall, mostly spared from the destruction. The mall looks and feels very realistic, and it wouldn't be surprising if it had been designed with a real-life counterpart in mind.
This being from the author of Red, there are a few attempts at jumpscares, but mostly the map avoids the various tricks that have by now become clichťs. Gameplay relies on the usual keys and buttons with a bit of platforming in between. You'll be fighting monsters of all shapes and sizes, mostly in fair combat situations that don't really become much of a challenge until the final battle where a tactical retreat should be taken under consideration. Ammo and health are abundant so long as you bother to stray from the path every now and then to look for goodies. The map comes with a new custom track by the Oostrum brothers, a track that captures the post-collapse mood of the map perfectly.

Conclusion: Apocollapse is a very promising start to Merlijn's new map series. While pretty standard gameplay-wise, its design is the definition of epic, constantly firing on all cylinders with its post-devastation theme. The only problem here is that expectations for the sequel couldn't be much higher. 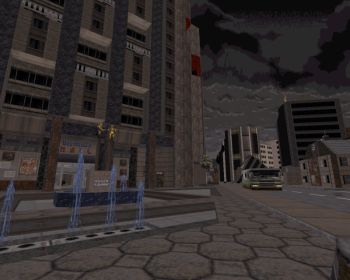 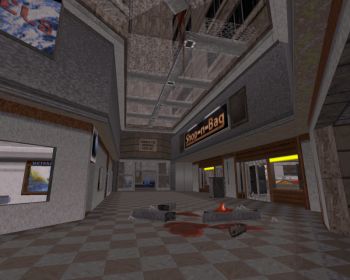