Description: A huge city map with a very unique look and feel. Like many maps these days, this one is by a Russian.

Into it: You know those old city maps that were huge, with tons of places to visit and felt a bit, well, surreal? Well, while most of those maps sucked, or at least suck by today's standards, this one is pretty stunning. It's like E3L4 (one of my favorite original maps) but much, much bigger. The map consists of tall skyscrapers surrounded by gigantic canyons and a subway system. As the map progresses you're treated with bigger and bigger, even majestic, visuals of a city that has a certain dream-like quality to it. If I ever had to define Conceptual Grandness, this is the map I'd use as an example.

What is equally stunning is that apparently the author has not heard of EDuke32 because the map has exactly 1024 sectors, the old limit. This pretty much means that something has had to give and that is the quality of indoor locations. There were a few square rooms with nothing in them. However, this isn't as bad as it sounds because there are only a few indoor locations anyway. There is also a lot of sloppiness around such as misaligned and stretched textures. Many doors at the boundaries of the gameplay area are just sprites.

I spent 45 minutes playing the map of which I was totally lost for about five minutes. The size of the map pretty much ensures that you get lost sooner or later even though it feels like there's always something new to discover, a route you made a mental note of but didn't check out yet. There aren't any puzzles really, just two keys both of which you should get prior to finding their locks. This is not a bad thing at all, as it'd be a bad idea to force the player to go hunting buttons that'd only needlessly extend the maps's duration. Item/monster ratio is perfect with tons of awesome firefights. I ended up having a kill count of 656 but at least half of that were slimers. One thing the author should have done is provide a viewscreen early on in the game with hints of where the first key and its lock are. There's a cool, albeit not entirely fitting, surprise near the end. As for the ending itself, well, it's a bit abrupt but forgivable if we get a sequel.

Conclusion: The level started off pretty slow with mediocre design but as the city grew larger and larger my opinion of it grew more and more favorable. It was only around 36 minutes that I begun to feel frustrated but as soon as I found my way to wherever I was supposed to go, the frustration evaporated. There is a lot of potential to get lost which may have a considerable effect on how you view the map. Still, Anarxiticalńity is an experience you don't want to miss. 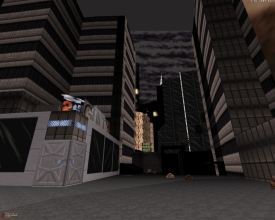 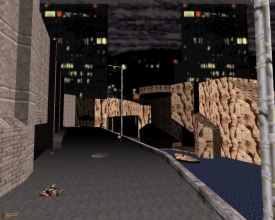 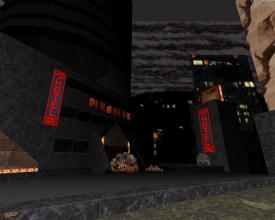 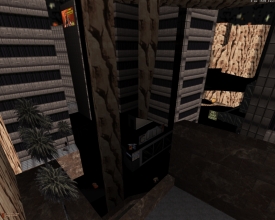