Since you guys stopped building, I've been forced to do some gravedigging again. Here's Urban Chaos, a hot map from 1997 by Vedran Jelenic.

Ugh, another two-week period without any new releases, but here's another shot of our ongoing 2-hour CBP project:

Haven't updated because there's nothing to update about. The summer started off well but it's been pretty quiet for a month now. But at any given time there are plenty of projects underway so fear not.

Anyways, we're trying to stimulate things a bit by trying to get another 2-hour CBP project done. Here's a screenshot showing a location I built about an hour ago: 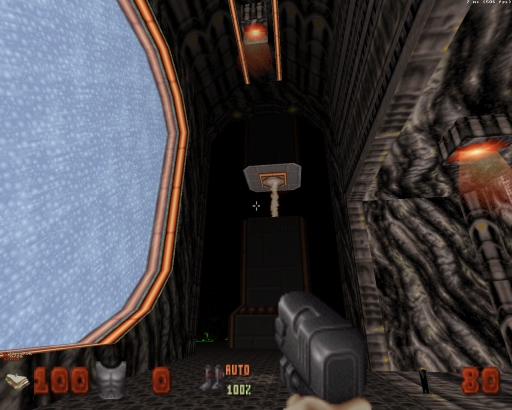 Russia is known for corruption, vodka, imperialist nostalgia and general backwardness but they've got two good things worth mentioning: great hockey players and Duke 3D mappers. Bad Weekend is Mister Sinister's first public release, released a few days before his Canyon, which was reviewed here two weeks ago. So, fight the heat by closing your curtains and playing some Duke!

NerdKoopa's first public release, Elements, is a worthy "temple" type of map, a type that's never been very popular so enjoy the map; it might take a while before you get to play something like this again.

Mister Sinister is the latest Russian addition to the Community and he's already released one episode, which is to be reviewed a bit later. However, his most recent release is Canyon, a flawed but still worthy map.

New maps are pouring in like immigrants to Europe but MSDN is silent. On top of having been out of town for more than a week now, I wasn't able to access the Duke4.net server (or website) until yesterday.

Here's Area 27 by Supertanker, the first of several maps to be reviewed during the remainder of the month.

First of all, my Half-Life single-player mod, Fate Reversal, is finally done (has been since Monday actually)! This is my biggest release so far so take a look.

And then, a new hottie, Sanek's Wide Open Spaces.

More hotties are on the way so stay tuned!

It looks like we're picking up speed again. Nightshade Army is the first among several new releases of the summer.

Also, if all goes well, the release of my HL mod is a matter of days.