DUKE, IT'S ZEROHOUR BY ZEROHOUR SOFTWARE 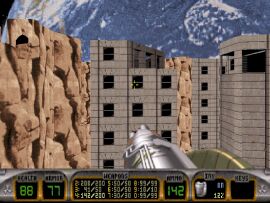 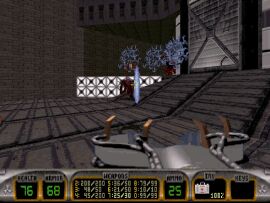 -Levels:
Zerohour levels are huge places with lots of huge areas, caves, water etc. Details are missing but levels still look good (this is what good levels used to be back in the 1997-1998). Good (and big) puzzles - not the easiest and not the hardest. Dying happens rarely - mostly in two last levels. Levels are normally filled with medkits. There are hi-tech bases, outdoor canyons and some city levels in the end. There's this same briefing room in the beginning of each level which tells you your mission. Anyways I think that Zerohour has two levels too much because during the last levels a blood vessel popped in my head:) One episode and about 10 levels.
Score 7˝/10

-Enemies:
All monsters has been replaced with new stuff. Cons haven't changed much. There are these normal red monsters and tons of flying creatures. Arts & cons are okay - nothing spectacular. But I loved those androids that appeared during the city levels. They're quite much similar to the ones in Terminator films. It just might be the case once again the old enemies would have been better;)
Score 7/10 -Weapons:
Most of the weapons has been replaced with new arts. Shrinker shoots now some electronic sparks and freezer is now some flamethrower. Arts are ok and new effects are better (too bad they were only used in two guns).
Score 7/10 -Other:
There aren't much new sounds or arts but the ones that there are are pretty much okay.
Score 6/10 Lastability: Huge levels full of adventure and ok enemies & weapons. Worth trying. I'm sure you like it:
WWW: http://ftp.sunet.se/pub/games/PC/3drealms/duke3d/tc/zerohour/
Version: 1.4, 1.5
Author: ZeroHour Software
Size: 6.3Mt
Score: 7