Obviously a sequel to Unreal which was released back in -98. Our expectations were pretty high after the first part - especially after three years of waiting for this one. However this one has very little to do with Unreal - The only thing in common is the universe which has some references to other Unreal games - there are Skaarj warriors & some Liandri stuff. But the storyline shares nothing with the original piece.

As you could expect the graphics are awesome. Textures are extremely high quality and outdoor areas are massive with tons of hills, grass etc. You'll need a good computer to run this one. Like in Unreal you'll find yourself staring at the game's beauty more than just once.

Unreal 2 comes with a storyline. You're a marine and your mission is to find seven alien artifacts. You have your own ship and three friends - some alien dude (the pilot), Isaak - the technician & Aida - the woman. You are briefed at your ship after each mission and you have a chance to talk with your mates.

How all this works? Not as well as it could. Level design is mostly good with lots of outdoor areas. There's a lot of variety since each planet where you'll travel is different. There are organic locations, hi-tech bases, mountains etc. You'll be walking around a lot - pushing buttons & completing simple missions. One thing you might notice is how slowly the player walks which is a bit annoying - especially when you'd like to travel around searching for something. Soundtrack is a lot worse than Unreal's - you almost want to turn it off. Voice acting is mostly average but sometimes goes below that. There are some tough boss-combats in the end which are pretty well made and fun while they last. AI is good and every combat is a challenge in a way. There are some good missions like the ones where you have to defend your ship or some dude - You can pick up Field Generators & Turrets which you can place wherever you want and use them against the enemy invasion. The storyline starts very slowly - it's a bit better in the end but still it could be better. Collecting those artifacts feels like a lame excuse for killing. The drama at the ship is average - sometimes above but more often below.

Final word: It's pretty and it has some good levels. However the storyline is mostly uninteresting and the game gets boring. People say that Unreal 2 could be longer but I say it should be shorter. I recommend you to buy this product only if you can find it cheap - and only if your computer can handle it. 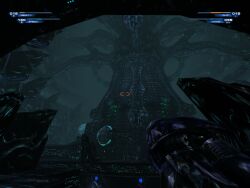 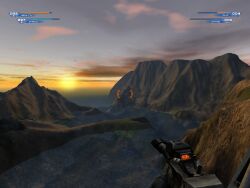