THE CHRISTMAS PROJECT BY RUSTY NAILS & MBLACKWELL Note: If you can't launch the game (I couldn't) download this release and keep your fingers crossed: http://mb.mirage.org/tcs/oduke/ODukeRelease002.zip

A Christmas gift from Rusty Nails & Mblackwell. If you have played Point Of View mod for Half-Life you know what to expect. You're that alien slave guy from Half-Life - that Xen creature who uses electricity against his/her enemies.

'The Christmas Project' is basically a technology demo - it shows what you can do with Duke3D & its source code. There are tons of new effects - the kind of things you wouldn't expect to see in this crappy old game. As a game this release isn't the most pleasing one.

Level design is detailed and well shaded. Locations use enough ambient sounds and there are enough new tricks to keep your interest up (even scripted sequences). Still the two levels in this release are pretty short. Combats are the weakest part in this release - Surely you can't expect this slave to be able to use handguns - the slave in POV wasn't able to use anything else than this electricity & hands. However I can't take the kind of a 'tactical' approach toward combats in this mod as I can take in POV or in any other mod. The way enemies are being thrown at you (enter a building - four enemies appear outside) could be better. I also didn't like how you were 'thrown out' of the locations when trying to enter them - Why the player isn't able to choose the order in which he looks for the objects by himself?

Scripted sequences, tons of new effects & two pretty good levels - it feels like a new game. I hope that projects like this inspire more and more people to experiment with Duke3D. But as a smallish 'mod' this kind of a gameplay style doesn't work as well as the original Duke3D. Combats are more frustrating than enjoyable. So keep the levels and the new technology but gimme back that old shotgun;) 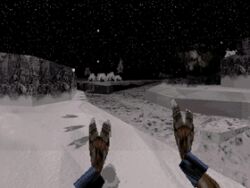 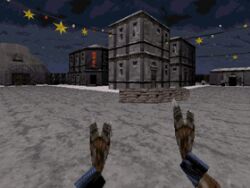