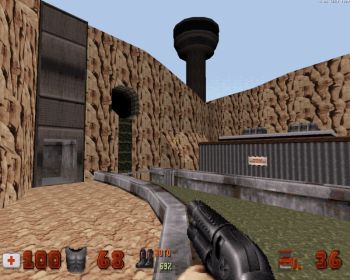 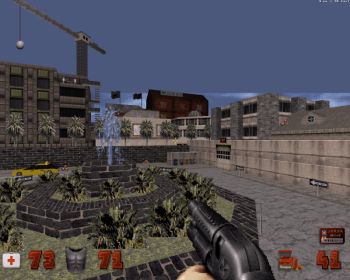 TamDuke is a rather long 10-map episode centered around Tampere, a Finnish city/town. Given the fact that there are no new textures aside from the map title screens, this iteration of Tampere has a rather sunny look to it with its palm trees and canyons which you shouldn't find anywhere near Finland. The maps vary in size from 5-minute quickies to 30-minute long slaughterfests. There's also noticeable variation in quality, explained by the episode's 10-year development cycle. To be sure, there's nothing too stark; the first few maps are of decent quality, but they're definitely more lacking in areas such as trimwork and lighting than the latter maps. The episode boasts consistently high-quality outdoor areas but particularly the early indoor areas could have used more work; some indoor-centered maps such as one taking place in and around a hotel felt a bit too claustrophobic and monotonic once you actually got inside the hotel. The latter maps have more to offer. For example, there's a spacious expo center and an expansive water-treatment plant with perhaps the episode's best visuals. It's also rather ambitious that every map is based on some real-life location, and there's also a secret map that's just as nuts as its name implies.

Overall the episode suffers from some idiosyncracies such as nasty in-yer-face explosions and throwing the player off with all kinds of little puzzles and tricks that end up being more annoying than satisfying. Also, in some of the maps there are just so many optional locations that it becomes easy to get lost. Some people may prefer such "exploration" but it should't come at the expense of clarity. Monster count is pretty high but fair throughout aside from a few Commanders that have a nasty habit of occupying already cramped areas. There are also instances where the author throws a huge horde of enemies at the player but these bits tend to be skippable so long as you're quick with your feet. Should you choose to stick around and fight, there's often a generous pile of explosives ammo right before the carnage. The author is generous also with secrets so those starving for that kind of stuff should love exploring the maps.

As for the city itself, I have visited it about ten times so I recognize some of the locations. The train station, perhaps the episode's best map, was a rather surreal experience as I have had to spend several hours there waiting for a connecting train, which our state-run railway company seems unable to provide on time. Naturally there are plenty of recognizable landmarks which should satisfy even those who're not familiar with their real-life counterparts. The author seems to have an affinity for cars as they're numerous and increasingly detailed as you progress toward the end. The ending itself is rather abrupt, definitely a strange choice to end an episode that's been under construction for ten years. The Californian vibe you get off the episode may have been a conscious choice but just a few custom textures (mostly for the skies, canyons and trees) could have given the city a bit gloomier look, and a few new or upgraded monsters couldn't have hurt either.

Conclusion: So far, aside from Los Angeles, not many cities have had the honor of being featured so prominently in Duke3D. TamDuke rectifies that by taking Duke across the Atlantic and throwing him in the middle of what must seem like a small town in comparison. The episode suffers from a few annoyances that pop up every now and then, but overall it's a commendable piece of work that ambitiously seeks to and largely succeeds in recreating a real-life town. 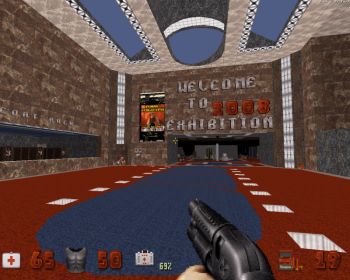 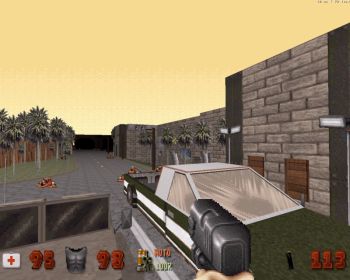