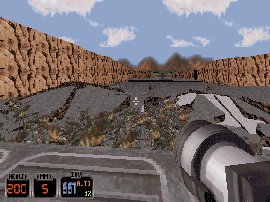 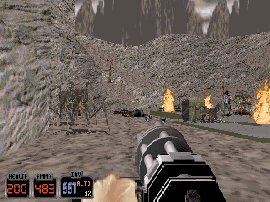 -Levels:
Includes about eleven new levels for single player and more for CTF. Levels are in three episodes. Every level is well designed and puzzles are made with sense although most of them are pretty basic - just in a different environment. My personal favorite was the first level of the second episode which was an abandoned city. It was ruined and quiet. There were only a few monsters in it which resulted in a nice tension build-up & excitement. My second favorite was the secret level (which can be found from e2l1). It was a spooky "Aliens" -type level. Design was good and this one also works as a tension-builder. The levels are mainly outside areas and wide valleys. Almost every level begins with a good looking briefing map (partly thanks to spritework).
Score 10/10

-Enemies:
Five new ones - from the film. Arachnid (Warrior Bug) is the normal dude we saw in the film. It's ugly, fast and deadly. The model looks very good and it's well coded - behaves the way it should. Then there's a Hopper Bug who's a flying dude which might be a bit annoying. Brain Bug is a huge bug guarded by many arachnids. Tanker Bug is also huge and dangerous. It spits fire. Every enemy is well coded. Tanker & Brain could have used a bit more non-gray colors.
Score 9˝/10 -Weapons:
Every weapon except devastator has been replaced by a better one. Morita Rifle is the standard rapid-fire weapon for which there's a shotgun function too. The machinegun looks good and sounds ok. The Nuke launcher is something different - When you fire it you better stay far away from the explosion. The explosion effect is fantastic. Pipe Bombs are now Grenades. Then you have somekind of a poison grenade and a flamethrower. Every gun has excellent graphics and they are well coded.
Score 10/10 -Other:
Lots of new wav musics and sound files. New textures looks very well made and fit with the theme. Lots of other things too like workind ladders and air strikes.
Score 10/10 Lastability: Best TC ever. Good enemies, weapons and levels. Get it:
WWW:<Fileplanet
Version: 1.3d, 1.4, 1.5
Author: BGAME and SST TC team
Size: 20Mt
Score: 10 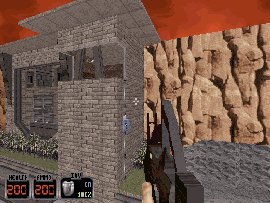 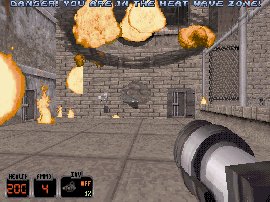