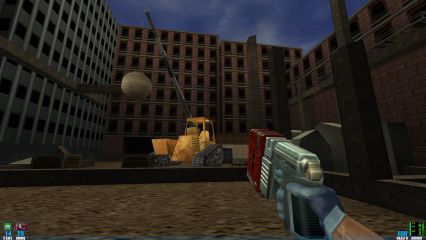 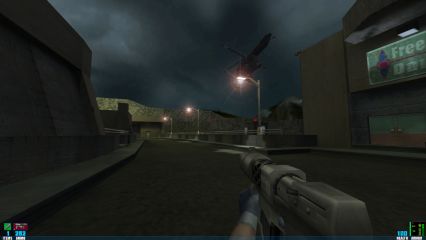 Note: The GOG version is bundled with the Wages of Sin mission pack. On Steam you need to purchase Sin Episodes: Emergence to get the 1998 game, but the mission pack is not included. You need patches for wide-screen support and to disable mouse acceleration.

Sin was dead on arrival; released in late 1998 buggy as hell, the common wisdom at the time had it that Activision had rushed the game out so that it wouldn't have to compete with Half-Life. It wasn't the lukewarm reviews that destroyed it (the game never had the kind of overwhelmingly negative critical reception that, say, Daikatana had); it was word-of-mouth. I personally experienced the hell Sin was in the weeks following the release; while I got Half-Life for Christmas, my friend got Sin (and this was in the pre-DRM era when it was still relatively easy to install the same copy on multiple machines). The map loading times could be as high five minutes and there was intense stuttering; the very opening helicopter sequence was a stuttering mess that only Polymer could rival more than a decade later, and some of the maps involving trial and error were pure agony because of the long loading times. There were plenty of other issues too, including game-breaking bugs. A patch was later released, but it was around 20 megabytes; on a dial-up it'd have taken around three hours during which your phone had to be disconnected (and you paid by the minute for the used bandwidth). A common way to get patches in those days was to purchase a gaming magazine (PC Gamer, PC Zone, etc.) with a cover disc for what would amount to around 20€ in today's money: I heard that in America the publisher agreed to send CD-ROMs with the patch to those who had bought the game but couldn't download the patch.

The patch, however, didn't elevate Sin to classic status, because at the end of the day Sin simply wasn't anything special. Half-Life, meanwhile, revolutionized the genre (for the worse, some believe). But Sin definitely did have its moments. The maps are pretty solid work all around; they are detailed with that unmistakable and pleasantly soft Q2-engine architecture all around. The Duke3D fan in me loved all the familiar and colorful urban themes (some courtesy of the legendary Levelord!), especially after having gone through the generic industrial facilities of Quake 2 and otherwordly landscapes of Unreal a billion times by the end of 1998. Moreover, there are interactive elements, such as computers and vehicles you can operate, and destruction. It was common for Duke3D fans back then to feel that first-person shooters had taken a step backward with Quake; games released subsequently such as Quake 2, Sin and Half-Life were only slowly inching back toward the standards that Duke3D had set. (This is one reason why people had such high hopes for Duke Nukem Forever; it was to be like Duke Nukem 3D but on a better engine.) Sin had some of those elements that made the maps feel like actual locations rather than just generic shooting galleries for the player. The game also took a cue from Quake 2 by having each map contain several objectives. Sin is also unquestionably '90s, an era where men were badasses without any "deep personal issues", nerds were funny sidekicks at best and it was okay for women to both look hot and kick ass. Compare that to today's "intellectual" climate where Elexis Sinclaire would result in fascist bullying, followed by pitiful capitulations by people who lack the moral courage to stand up for their creations. 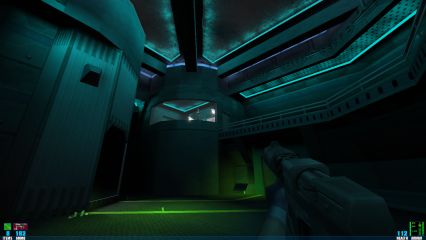 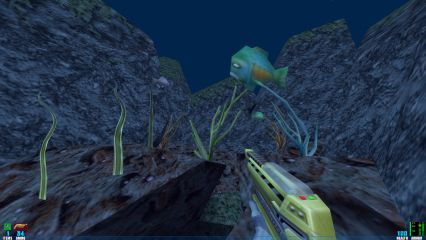 But that's pretty much it as far as positive things about this game are concerned. Even if the major game-breaking issues were patched, the game still remains a sloppy, unfinished piece of work. For evidence I give you my 30 Theses Against Sin:


Overall I'd name combat the biggest issue, which is ironic for a game that some (but not many) have called the last great oldskool shooter of the '90s. The combat just feels like it lacks impact, probably an unfortunate side effect of the game using the Quake 2 Engine. While I'm a huge fan of Quake 2, it was obvious to anyone not living in denial that something had happened between Quake and Quake 2. Gone were the punchy sound effects and visceral feel of Quake. Quake 2 had a great selection of weapons and monsters, but the weapons sounded weak and everything just felt a bit "floaty". Sin had gotten only worse in this regard; sounds of combat are barely audible in the midst of all the ambient noise, you can barely hear the enemy and explosions sound downright pitiful. There are some nice blood spatters and impact wounds in Sin, but the emphasis on landing successful headshots is just too much as it makes it completely pointless to shoot anywhere else (which also has the effect of making the shotgun unusually ineffective). Snappier weapon switch animations alone could have helped noticeably; as it is, Blade feels as if he's an old man. Half-Life (whose GoldSrc engine was built on top of the Quake Engine) felt like a polar opposite with its visceral feel, loud weapons and credible human AI, not to mention the game struck a much better balance between headshots and bodyshots.

The mission pack retains the clunky, floaty feel of the base game but makes a few improvements. The maps feel slightly more spacious, they have more details and even clearly better architecture and they are better integrated as a unit. The cutscenes are also longer and better "directed", but these days many might view this as a negative; '90s shooters were definitely not known for their lengthy cutscenes. The new weapons are pretty fun, especially a device that fires multiple rockets at a time (just make sure you have enough room around you) and the game finally has a flashlight. The last hour or so killed all the fun though, starting with a "stealth" map where you're told to avoid detection, but it turns out you still have to kill enemies one by one anyway until you find the right guy, then shoot the guys you had been avoiding all along. Then they put you in a laboratory map with tight corridors and doors that close in an instant, ending it with your run-of-the-mill boss fight (with awkward throw animations) and the most annoying vent section ever. The actual final battle is a spammy quicksave/quickload fest.

Conclusion: To me Sin is in a bit of a limbo. Back in the day performance issues prevented me from fully appreciating the good things, and by the time I got around to playing the game a second time (somewhere around the time the superior Sin Episodes was released), it was just too late. The game has way too many small annoyances - signs of a rushed development process no doubt - and the combat is surprisingly flat for a '90s shooter. A few things will make you go "this might have looked cool back in the day if I could have actually enjoyed the game back then", and those with a soul will enjoy the pure '90s vibe, but that's about it. 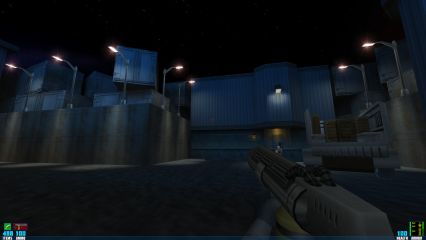 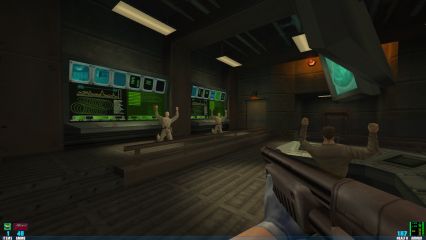