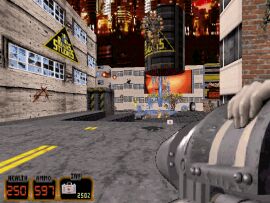 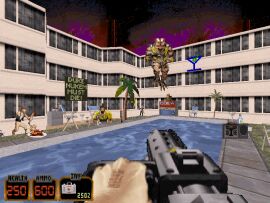 -Levels:
Well this is the first time that I have actually loved to play buggy levels. Levels one, two, three & four are all full of bugs. There are dozens of misaligned textures, doors are too big, maskwalls doesn't block player, there are missing new arts (shown as brick-sprites in game), unlogic places (on the other side of a building there's a yard with a grass and on the other side there's a rooftop), empty areas, huge doors (even four times the size of Duke), doors opening to a wrong direction etc. With some more time these things could have been fixed easily. But anyways levels are full of enemies, activity and all kind of sunny stuff. Theme is close to 'Duke Carribean' (commercial add-on) with beaches, hotels, night-clubs etc. Each level is a city level with some canyon sections etc. Puzzles are ok but a bit confusing in first two levels - There are lots of locations but only some of them requires keys. Fifth level looked quite good so author has done some progress since the first levels of this TC. So even level design is buggy & below average (doesn't really have details - but places are still full of stuff) it's still fun and full of interesting stuff. Oh and level three has no exit (use dnscotty104).
Score 6/10

-Enemies:
No new enemies really. Pig Cops wear these 'honolulu' clothes from 'Duke Carribean', Enforcer has been replaced with this white dude from some TC (can't remember the name right now) etc. But as you know I'm not a fan of new enemies so this works well with the old ones.
Score 6/10 -Weapons:
Same as enemies - no new effects but new arts. Pistol is now mp5 (not made by author - ripped from that weapon pack), shotgun is from Doom, chaingun & rpg have been taken from Lameduke etc. Weapons are now more powerful & have more ammo. With chaingun for example you can kill the boss in a couple of seconds. These new settings work quite well because levels are filled with enemies.
Score 6/10 -Other:
Lots of sunny art ripped from Duke Carribean as well as lots of pornographic pictures from levels like 'Penthouse Paradise'. Some of it sucks - some of it fits for the theme. Porno should have stayed out. But hey - it gives some reason for kids to get this one. New sounds are quite good with new barmusics, weapon effects etc.
Score 6/10 Lastability: Unfinished levels but still extremely fun & refreshing TC:
WWW: http://dukes-revenge.totalconversions.com/
Version: 1.5
Author: Duke's Revenge TC team
Size: 17Mt
Score: 6