When Eddy released this small Total Conversion (and it is as total as one can be), many asked why he did it in the first place, seeing how Quake TC is almost exactly like Quake, and as such not really a Duke3D mod. But I guess the answer is along the lines of "because he could". The mod really makes you believe you're playing Quake, except for those individually tiny but common occurences when the mod doesn't behave exactly like Quake, like when a Knight takes only three shotgun shots to die or when an explosive causes more damage than it should. Those who're very familiar with Quake should have a fun time noticing all these little things.

This demo has two maps, one of which is a proper medium-size medieval map and the other a shortish test map that mixes hi-tech and medieval themes. (There are also several tiny, one-room test maps with all the weapons, items and monsters that don't appear in the two maps.) While the proper demo map might appear to be something that could've come out of Quake, it's still unmistakably a Duke3D map due to its 2,5D look. The mod also supports Polymer lighting effects but I didn't want to risk my computer having a memory leak so all I got was bland lighting. The mod is standalone. 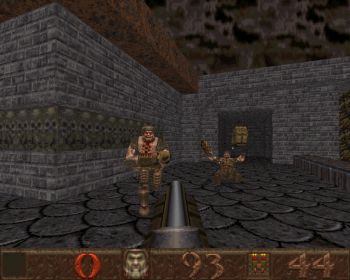 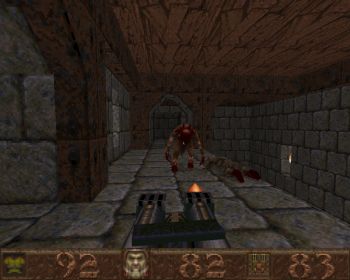