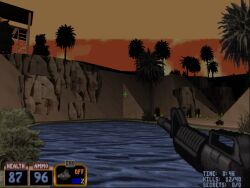 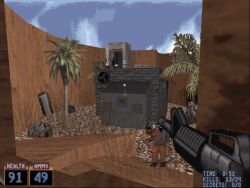 Last week we reviewed Quest for Hussein. Today is time for another you vs. arabs pack. Quest for Al Qaeda is another "exploitation" game made after 9/11. The core game is just three pathetic levels with some fun ideas (which were later recycled in Hussein). However, with Geoffrey's map pack, things get a bit more interesting.

The three original levels are kinda empty and there isn't a proper ending. Geoff's maps have more details and more interesting settings but even they follow the traditional shoot & find some keys gameplay. This isn't really such a big deal since that's what you'd expect from any Duke3D TC (this is actually a standalone game) but you can't avoid comparing this with Platoon which had better looking and longer levels with more variety in terms of gameplay.

Like in Quest for Hussein, there is maybe just one enemy type. You don't even get to kill Osama:( Weapons & such have been ripped from other games & Platoon TC.

To get this thing to run properly, copy EDuke32.exe into your Al Qaeda directory and rename Quest1.grp to Duke3d.grp. Then run EDuke32. 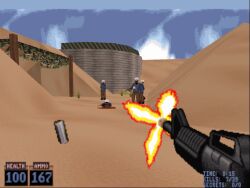 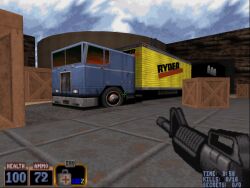