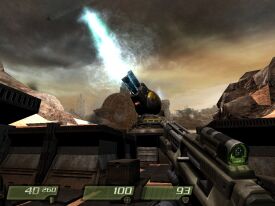 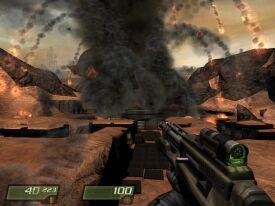 Play.com was selling this for about ten euros a few months after its release so I bought it and let it rot for a few months until a few weeks ago when I was without an internet access and decided to take a look. The reviews seemed to agree that Q4 was a good game - neither excellent nor a match to HL2 or Doom 3 but enjoyable nevertheless. I was more than surprised to find that Q4 challenges both Doom 3 and Half-Life 2. 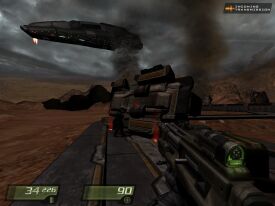 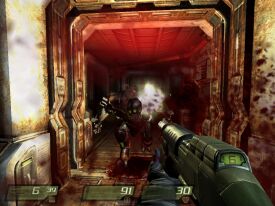 This is a real sequel to Quake 2. Makron has been defeated and the planet's planetary defense has been deactivated. There's a lot of stuff and ambience from Quake 2. Yet what surprised me was that Q4 is a mix of Doom 3 and Call of Duty/Half-Life 2. There's a lot more variety than, say, in Doom 3. Not only you get to drive some vehicles but there's also a constant sense of an ongoing war around you (as Q2 had back in the days). About half of the time is spent with one or a few friends.

The game also includes maybe the most impressive scene in a first person shooter yet - Kane's visit to Strogg doctors. Gameplay is slightly affected after this via an increase in running speed and a new health/armor maximum. But it's the "visit" that you have to experience. Your first trip to a "rooftop" is also pretty spectacular - especially the time when you first get to see a pretty landscape on your way up via an elevator. The "gross out factor" is pretty high - this is the most "disturbingly" violent game I have ever played - pretty much for the same reasons as Q2 was back in the days - just that this time it looks even more gross. 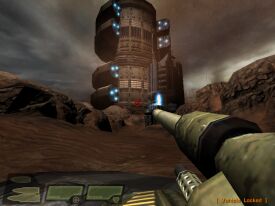 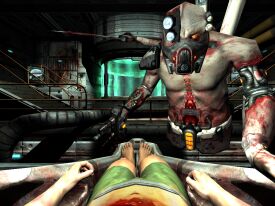 Monsters & weapons are pretty much from Q2 (with an additional lightning gun from Q1/Q3A and minus the double-barreled shotgun from Q2) but they've got all new graphics and AI so it doesn't feel cheap (besides - I wouldn't expect anything more from a true Q2 sequel). I completed the game on medium skill setting and it was well balanced with tougher fights appearing near the end.

I just "had" to run this with 1024x768 and medium graphic settings because it looked so good. As a downside there were some laggy moments but it was worth it (2Ghz, 1Gig of Ram and R9600 Pro). The game runs smoothly with lower settings.

Conclusion: I was surprised at how entertaining Quake 4 was. It may not be as revolutionary as Half-Life 2 or as moody as Doom 3 but it sure as hell manages to combine some of the best elements of both of them. 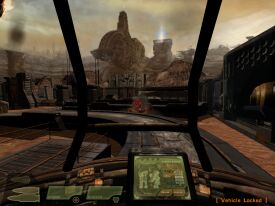 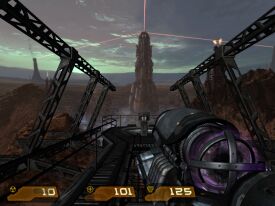