THE PREMIUM EDITION TC BY THE GANGSTER The Premium Edition TC is a remake of Counter-Strike. It works as a standalone but was made using 1.3d so there are no bots which is a bad thing these days when it's hard to find online Dukers.

Levels are pretty well done - Out of nine levels about four are Counter-Strike remakes (Cbble, Dust, Rotterdam & Tundra). New levels look pretty good as well. There are two Kingpin influenced street levels. They have some good innovations like new ambient sounds & people. These people don't move but they manage to create some realistic atmosphere. However - it's very hard to tell much about these levels when you have no opponents.

New weapons look pretty good. They have realistic models and they have been ripped from different games. Sounds are good too. However there are some problems. Duke as a base causes some weapons like UMP (replaces Freezer) & Sniper (replaces shrinker) act bizarre - bullets move slowly and you can see freeze & shrink sparks as they hit walls. I don't know how they act against enemies.

New arts are mostly good but some are a bit messy. New ambient sounds work very well. Good levels & good weapons but nothing to play against. I can't give any scores because I can't judge weapons & levels without enemies.

Single Player Frag Practice
This is a small program (less than 1mb) which allows you to play Premium Edition against enemies. These enemies are like Pig Cops (with Phoenix skin from CS) - they move slowly & are armed with shotguns. One well aimed shotgun blast kills them. They're all around the levels - mostly on open areas. Program is a simple .bat file which asks you what level you would like to play. Enemies respawn automatically.
Premium Edition with these 'bots' is really enjoyable. Sounds, graphics, new weapons & code all work very well with these bots. Levels work well also even they're pretty large (a thing which I usually dislike). 'Steeltown' looks very good with it's dark look & rock music. I was also able to spot some scenes from excellent movies 'The Matrix' & 'The Crow'. However levels only include about four weapons - pistol, shotgun, ak47 & grenades. There were also some Trip Mines. I couldn't find any of the other weapons such as sniper (you can always get them by typing dnstuff).
Download program here (by Rob Wijkstra) 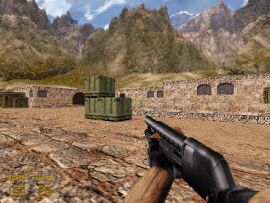 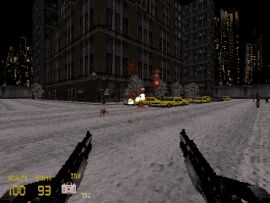