Portal is a tiny, three-hour gimmick game utilizing the Source engine. The point is to solve various puzzles with the use of a gun that fires portals, the Portal Gun. No doubt you're familiar with the concept by now.

The game starts easy and gets progressively more difficult as you keep solving puzzles. However, even the most difficult challenges should take no more than a few minutes. I think this is because the puzzles in Portal are fair. They're logical and don't underestimate (or overestimate for that matter) the player. The best thing about puzzle games like Portal is the feeling of being rewarded every time you solve a puzzle. Most of the time you have plenty of time to think of a solution to a given problem but sometimes you end up in a situation where you have to think fast or, more often, act fast. 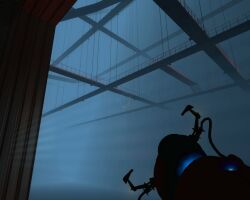 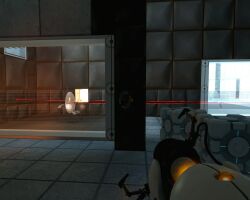 The sterile, mostly B&W environment reminded me of the Combine levels in Half-Life 2 (Dark Energy and so on). The story is also in a way entwined to that of HL2 but Portal has a plot of its own which really hits a high gear once you pass the "main game". The ending seemed to stretch a little bit but my guess is that this was because I finished the game in one sitting so by the time I was near the end my head started to hurt. I also liked how the environment seemed so omitted of everything living. There's a robotic female voice guiding you the whole time but you never see anyone even though you're constanly aware of being watched (there are windows everywhere but they're so fuzzy that you can't properly see what's behind them).

Conclusion: Once again Valve pumped out pure gold. I wouldn't pay much for Portal due to it being so short but if you can get it cheap (it was around 5€ via Steam when I ordered it) don't miss the opportunity. I didn't miss holding a proper gun in my hands for a second. 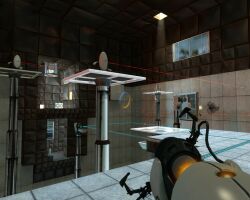 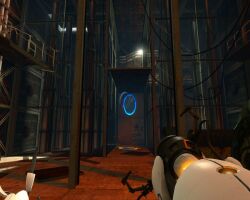