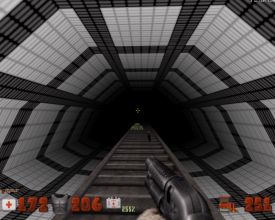 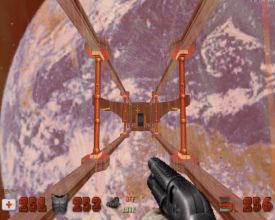 Zaxtor's Oblivion Total Conversion is a massive, highly ambitious project. It took five years and the final product has no less than 50 maps, most of them massive in size and scope. Instead of putting Duke once again against the standard aliens, in Oblivion the main character is an anthro-Fossa who ends up in the middle of a space war that threatens his home planet.

The previous three episodes were reviewed here, here and here. This review concerns the fourth and, to some degree, fifth episodes. The fourth episode expands the story and has 11 maps. Themes vary from rainforests and hi-tech stations to bizarro worlds. Most of the level themes are already familiar if you've played the three previous episodes. The levels are huge (described as "hyper long" in the readme although only one level managed to take me more than an hour and none was quite as long as, say, Big Light) almost without exceptions. Because of the sheer size, the fourth episode alone should easily take more of your time than a modern first person shooter. 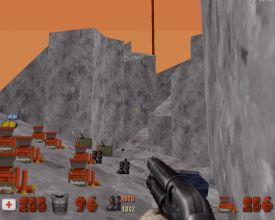 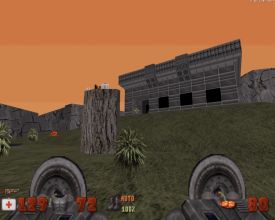 Every level is stunningly beautiful and epic. For example, in one of the last levels you find yourself jumping toward a massive floating mountain base. From one level to another Zaxtor keeps bombing you with impressive and complex spritework. There's also plenty of the kind of sector-over-sector tricks we have seen in Billy Boy's massive maps. The trick has been put into good use here, making the environment look real 3D instead of just fake 3D. Zax seems to be fond of making massive bases and he's just as good with open outdoor environments as with confined hi-tech bases, caves and thick jungles. The levels are filled with cool new effects and Zax's specialty - astounding fireworks.

But stunning visuals cannot hide toxic gameplay. Unfortunately, in his attempt to create an epic adventure, Zax went a bit too far with many of the puzzles and tricks he implemented. Too often a relatively pleasant map comes to a suddent stop because of a supposedly clever puzzle (and many of the maps were not so pleasant to begin with).

Take either of the two "rainforest on fire" maps. Visually, they're impressive; not too often you come across a jungle-themed Duke3D map that actually looks and feels like a thick jungle. Zax has succeeded in this, making several maps where the sheer amount of vegetation creates the kind of a look you don't get to encounter in Duke3D maps. But these maps are painfully frustrating. A simple misstep can get you killed instantly, visibility is horrible and you've got to do a lot of tedious jumping from one branch to another. And I'm saving the best for last: at the end of the first rainforest map I was confronted by a fossa creature that blocked my way to the Nukebutton (you could see it) and told me to go back and pick something up from who knows where. I told him to stick it and dnclipped my way to the Button (this was the first and only time I cheated not counting the times when a bug prevented me from continuing). Rainforest maps in previous Oblivion versions were bad already: setting them on fire only makes progression more tedious.

There is also an awful lot of backtracking. In the first episode you could push a button and not know which door just got opened. Since the second episode Zaxtor has tended to place symbols over doors to indicate which buttons open which doors. But this isn't very helpful when the map is huge and there are plenty of doors around. Also, in some levels you may end up going in the wrong way for minutes until you discover you're not where you're supposed to be.

A common source of frustration is repetition. Some bosses take forever to die even after you've figured out exactly what to do. Shooting at the same piece of object for a few minutes is like a bad episode of the Simpsons where some joke gets played out until it gets old - ten times. And it's not just bosses: one initially cool drilling effect ends up taking a minute when it should have taken a few seconds. Then, at the beginning of one of the best levels, you actually have to endure a four-minute elevator ride. You get to admire an underground hi-tech base and listen to some music on your way down but still, four minutes is insanity.

And then there are mazes - lots of them. In one of them, an entire map dedicated to mazes (called "The Labyrinth", perhaps the worst map in the entire TC), you've got to activate a set of devices. To do this, you need to strafe left and right, pushing space. Whether or not a device gets activated is not always that clear so you may need to go back and forth a few times to check it. Most players have no idea what to do and instead of consulting the author, they will just cheat their way out. Many puzzles are solved by the usual trial & error method and excessive saving/loading. (You may also need aspirin to keep headaches at bay.)

On top of all that are hidden buttons, random explosions, white screens, sounds that are just too damn loud and so on. Lack of beta testing shows; many of the flaws could have been easily noticed by a betatester and reported. At the end of the day, you're left with an epic adventure full of bad puzzles.

It's a shame to give this TC such a low score. It's a shame because this TC could have scored 9 or even 10. The levels are some of the best looking I have ever seen, there are tons of interesting new effects and innovations so it's a damn shame that an essentially poisonous gameplay has to ruin what could have been a truly epic exprerience. When it's all over (after a very epic and cool final level), you feel a sense of relief and reward but you never want to play the levels again. 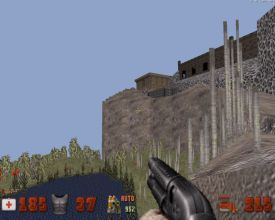 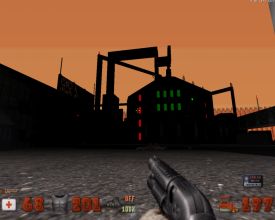 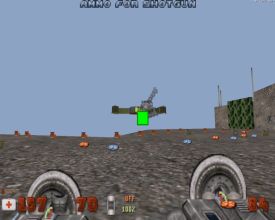 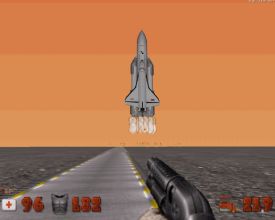