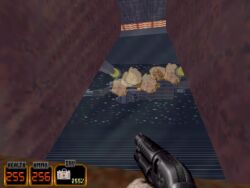 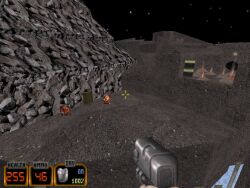 The Oblivion War continues in the second installment of the massive Oblivion TC. Oblivion 2 takes you to the deep pits of space. And there are no rain forest levels this time - thank god for that.

Oblivion Version 2 means 11 all-new levels with tons of new tricks, effects, monsters, weapons, textures and sounds. It's definitely worth the long download. And in case you haven't got the first part yet - don't worry since the first episode has been included with this release. It was all done in about six months - that's something none of us - except Zaxtor - could ever do. It has many flaws but let's take a look at the levels first:

As said - The v2 is all about space. A few asteroid bases, some outdoor asteroid-walks and the rest is all about space stations/space ships. There are many super-cool things such as scripted sequences (space ships getting destroyed, space debris hitting a space station, drone attacks etc.) and tons of innovative ideas - in every level. One fantastic thing is the way the outer parts of the space stations have been built - they're full of complex and colorful spritework (although the spritework can disappear at times). To save sectors and time Zax made some neat new textures out of level screenshots which he then used as maskwalls to portray space stations (like in level 2 you can see the space station from level 1). Levels are also well detailed and use the new textures pretty well. There's quite a lot of variety although some of the space station levels seem a bit too similar with each other (and I'm not talking about the one which was recycled).

Most of the new stuff is good. The weapons are the same as in the first release - mostly old Duke guns with some small improvements. You can have over 200 shells for shotgun and about 800 bullets for chaingun. Max health is now at 250. Considering how strong some of the bosses are these changes are understandable. There are also tons of new sounds - of which many are good ones but there are some annoying clips as well. And then there are some parts where some of the characters speak. These sound clips are good considering that there were no professional voice actors available - but the voice could be louder.

Gameplay is mostly good and feels unique. Zax has his own way to trick, confuse and piss off the player. There are many buttons, sometimes more than three keys and a lot of monsters. Most of the time the enemy/item balance is good as always in Zaxtor's levels. However - more than once you'll find yourself completely lost or facing a bad ass boss. One of Zaxtor's innovations are those Doom2-type demon-wall bosses. It's a cool new thing - but the combats end up being frustrating and long due to the massive amount of damage these bosses can take. The same with the Emperor boss - it's cool but too tough. Repeating the same pattern - duck&shoot - every second gets repetitive very fast. So the concept is good but the final implementation is poor. The Oblivion website has some useful hints in case you get stuck (and you will) during the levels. The ending is a bit anti-climax because of another boring boss. I had no Devastator weapon at all (it was taken away a while back and I couldn't find a new one) so I ended up shooting the boss with a shotgun - which was a painfully slow process.

Then a nice ending animation wraps it all up - until Zaxtor comes up with a new episode.

Conclusion: Whether you want to play this or not depends pretty much on your need for challenge. In terms of monsters it offers a reasonable challenge but in terms of puzzles & bosses it gets sometimes very frustrating or just boring. Even if you're a standard Sunday-Duker who checks new Duke3D stuff every now and then I'd still recommend you to try Oblivion V2 for its innovations and nice looking levels. 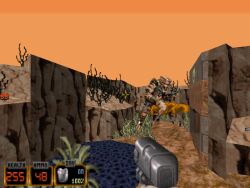 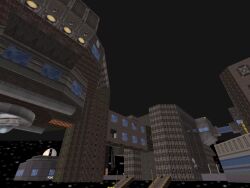