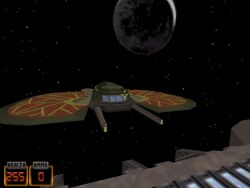 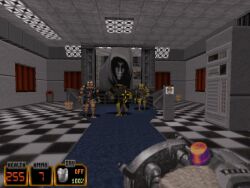 Zaxtor could be named 'The Machine' due to his ability to build fast without resting. This 'demo' was completed in less than a year. A project of this lenght could take someone years - and still might not have a release. But Zaxtor isn't just 'someone'.

Oblivion is not just a bunch of good levels but it comes with tons of new effects as well. While mapping Zaxtor spent time with con editing as well. And with a nice amount of motivation you can get pretty far all by yourself.

The adventure has a great start. You're in a huge space ship - just chilling in your room listening to music while an alarm goes on telling that an alien space ship is approaching. The next thing to do is to abandon your ship and escape with a pod.
Some of the levels will most definitely piss you off. The first two levels go by pretty easily but then you'll get stuck - the three rainforest levels are very difficult. Your vision is being blocked everywhere you look by dozens of trees & plants. Moving is hard, navigation even harder. Step by step you take over these levels - it's very possible to complete them without cheats (although I completed the second rainforest themed level -'The Rainforest' by using some bug in the level which took me to Nukebutton without having found all three keys (although I had already two of them - while looking for the last one I accidentially ended up near the end)).
After these levels it gets easier - but already the first military level after spending years in a forest is a bit confusing. Tons of buttons, keys & doors (plus a super-annoying teleport-puzzle and a huge maze). At one point you have to destroy two laser 'boxes' which keep shooting. The thing is that it's not the first thing you think of doing when you see a lava wall shooting at you (okay you might shoot once but when you notice that it won't help you might start looking for alternative ways to proceed). The player should have been given a hint of somekind before entering the room with the cannons (such as a viewscreen giving you some info).
Luckily it gets a bit easier after this. In 'The Doombase' you'll have to wipe out a bunch of enemies approaching your base. If they destroy the shield protecting your sector they'll reach the explosives and kaboom. 'The Sea Temple' is a very good looking level with some good underwater action (and a bunch of not-so-easy-or-logical puzzles). Two final levels - 'Scrapbrain' & 'Scrapbrain 2' are both excellent maps. They have tons of buttons & doors and they do get a bit confusing at times but they're still pretty easy compared to previous puzzle levels (and there's a great Sonic midi spicing up the gameplay).
Note:Don't try to use cheats to jump over levels ('dnscottyxx') since they have a different order in the game - for example E1L9 is not the ninth level.

Levels use mostly old enemies but there are some new ones as well. They're all Sentry Drone type howering small robots - and especially the black ones are tough. Midis are all pretty good although they started to piss me off while playing rainforest levels. The Fossa guy (replaces Duke) has a bunch of new one-liners - they might not be that top-quality but it's definitely better than nothing.

Some have experienced difficulties installing/running the game. To me it started complaining about the game.con file being too big. The problem was solved when I extracted all the files out of the oblivion.grp (then you have to have a fresh Duke3D install as well).

Conclusion: 'Oblivion' demo comes with a bunch of new cool things and offers a lot of variety. While some of the levels are enjoyable experiences and fun others are just frustratingly confusing. With easier gameplay the score could be at least one point higher. 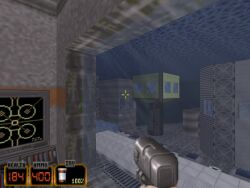 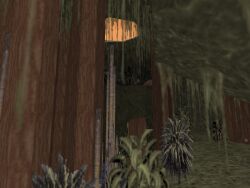