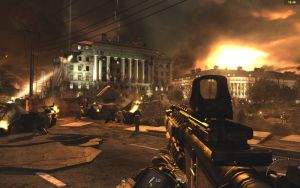 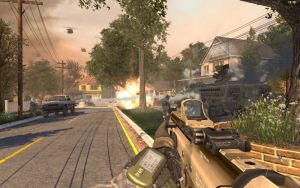 Essentially, the problem with Call of Duty 4: Modern Warfare was that it took the fucked up gameplay from Call of Duty 2 and put it in a modern setting. The multiplayer mode showed signs of promise with its killstreak rewards, perks, unlocks and ranks but fell flat thanks to the random of nature of combat. With two bad Call of Duty games in succession, I had lost my faith in the franchise. Then came Modern Warfare 2 and restored it.

Don't fool yourself thinking Modern Warfare 2 is anything but a pretty typical CoD game. The essentials are all there, but it's the little fixes that make this the best CoD title so far (and better than Black Ops). First of all, the single-player mode has better pacing. Granted, most of the time the campaign is of the exhausting, ADHD variety, but only a few of the maps (such as the first Rio map with its narrow alleys and enemies shooting from all directions) got so repetitive that I was banging my head against the keyboard. Often there's something that breaks the repetitive pattern, giving you a pause. Still, the game ought to be more like this.

The story is pretty hilarious but entertaining. A terrorist attack on a Russian airport (this tasteless mission can be skipped, which is what I did) leads Russia to attack the United States. This provides an opportunity for some fascinating visuals of the modern United States under attack. Among the campaign's brightest moments is a trip through Washington DC, soaked in rain and blackened by an EMP, with only fire and lightning guiding your way toward the White House. Gamers like me with an interest in history and politics should immediately appreciate the "what if" scenarios of the campaign, even if they're a bit tongue-in-cheek. The campaign, less than five hours in length, packed a bunch of memorable moments including cinematic sequences (which have considerable drawbacks too) and good voice acting. Aliens vs. Predator gained points for featuring the always-impressive Lance Henriksen. Modern Warfare 2 does the same. Lance's character plays a prominent role in the story, including its biggest plot twist. The rest of the voice cast does a good job too. 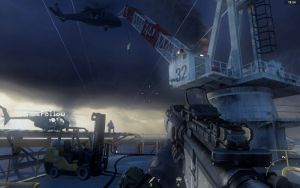 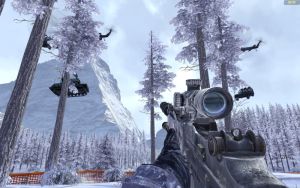 But the single-player campaign is just one half of the game. It's the multiplayer mode that has gained the most, even though many would disagree - and aggressively. The problem for many, which I can appreciate to a degree, is that there are no dedicated servers and no ability to create custom content. Console limitations are visible in online player caps as well. This, however, is perhaps the biggest improvement over Call of Duty 4. For example, every Free For All (deathmatch) map has a player limit of just 8 which is just perfect and does wonders to remove the awfully random combat of the predecessor. Now you're much less likely to get shot through walls, to get killed by a random grenade or in general be shot by someone you never even saw. Maps also tend to be bigger and better. Some may have noticed that as an online game ages, the number of maps that servers run in their map cycles shrinks. With no dedicated servers, there's no fear of this happening and every map gets cycled.

Nothing illustrates the improvement better than the old killstreak rewards; the airstrike and the chopper, which were deadly in the predecessor but practically useless in this sequel even though their behavior hasn't changed. While the old killstreak rewards are pretty useless (except for the UAV), there are tons of new ones from controllable chopper gunners and AC-130s (which was featured in the best campaign mission of CoD 4) to the Nuke, which requires a killstreak of 25 and, upon activation, kills everone and ends the round in your favor. Of the 15 killstreak rewards you can "carry" only three; trying out all kinds of different combinations brings an extra element to the game. This being a CoD game, there's tons of other stuff to unlock as well, which is kinda addicting up to a point. The maximum rank is now 70 and you can reach that eleven times by entering "Prestige" modes after having made it to rank 70 for the first time. (In other words, there are 770 ranks in total in MW2; at the time of writing this, I'm at rank 122 in total or at rank 52 of the first Prestige mode.)

While there are tons of different multiplayer modes the game remains pretty straightforward and easy so there's little motivation to play it for long in one sitting. After having made it to the max rank (and by that I don't mean rank 770) the game loses a lot of its appeal, at least for a while (I started playing the game a year ago have barely exceeded a hundred hours on the game clock). The game is essentially deathmatch and as such there just isn't that much stuff to do which is why I prefer games like Battlefield and Enemy Territory where the maps are larger and you have more control over how you play.

By now I should be wrapping up this review but there's a third mode available as well, the Special Ops mode. This is a two-player co-op mode (can be played solo as well) with tons of old, new and remixed maps. Many locations and missions from the campaign make an appearance and there's quite a bit of variety; you've got defensive missions, offensive missions, support missions, racing etc. Among my favorites, a mission where one player has to make his way from one end of the map to the other while his partner provides air support as an AC-130 gunner (Youtube video).

Conclusion: While Modern Warfare 2 remains a rather simplistic, easy game, as an entertainment package it's well worth its still-inflated price. While the single-player campaign is only 4-5 hours long, the package essentially consists of three games. Most importantly, flaws that were all too pervasive in Call of Duty 4 have pretty much all been fixed although the lack of dedicated servers infuriated many. Fans of stealth and slow-paced combat should probably avoid Modern Warfare 2. Elitist gamers who listen to crappy music and take great pride in being trendy MW2 haters probably should stay away from this game as well. 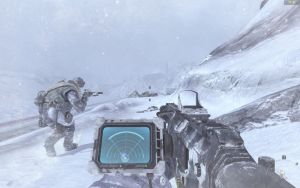 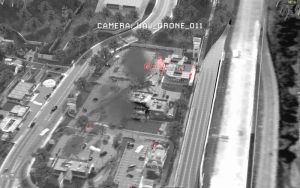 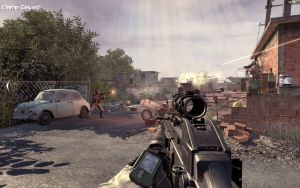 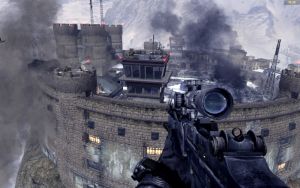