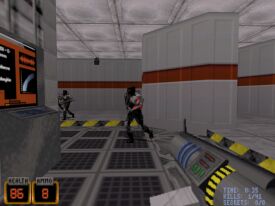 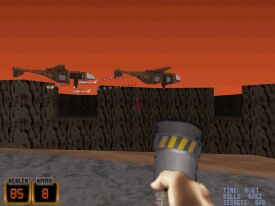 Duke is framed for murder and must kill everyone to prove his innocence. "The EDF Conspiracy" is more than ten years old "TC" with one episode and some new stuff. The enemies seem ripped from other games of that period. There are no aliens - just some robots and humans. After fighting aliens it's refreshing to blow some humans to bits and pieces. The new arsenal is fun and sounds good but for some reason I, the master of Duke, was constantly out of bullets during the last few maps. It's a bad sign when you have to start kicking monsters.
The levels are okay. The overall level of details is far from today's standards and the architecture is unimpressive but the levels don't really look bad and gameplay is, excluding the ammo issue, quite good. The first few city maps could have used a bit more life - now the streets are absent of nearly all life apart from you and the bad guy. "Cliffs" had some nice visuals, thanks to its outdoor setting and beautiful sky.

The EDF Conspiracy must have been a treat back in the days when its visuals might have been classified as something like "well above average". However, I myself didn't play Murder back in the days so I can only judge the thing after having played tons of modern levels and Conversions. Not a bad way to spend an hour or so. 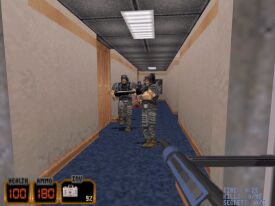 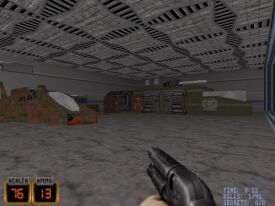