Mr The Killer by Seb Luca 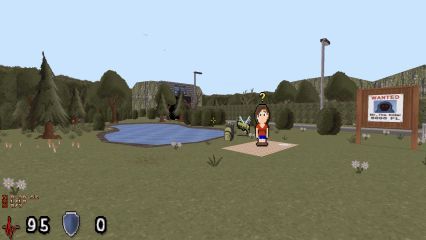 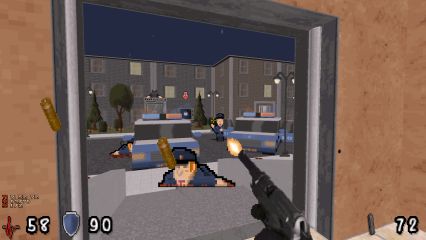 Mr The Killer is a six-level EDuke32 mod based on (and a sequel to) the author's 2D Le Tueur adventure/RPG games. You're an autistic killer "disguised as death" and in trouble with the law. Apart from being a Duke3D "total conversion", the mod doesn't have much in common with its base game, and yet a Duke3D player should still feel instantly comfortable with The Killer's core gameplay mechanics. The presentation is great, being an absurd blend of violence, humor and sunny atmosphere. While the mod should take you less than an hour to finish, there are plenty of locations to go around from small towns and hospitals to train rides and research facilities, all the while providing the player with a pleasant sense of progression and adventure. As in Duke3D, there are fun little details and bits of interactivity everywhere, including civilians you can talk with (or just kill; the protagonist isn't the most social type of person). The result is a world that feels alive and has its own history. Combat is satisfyingly simple with "punchy" weapons and a good selection of enemies. My only small gripe is that some of the mod's "puzzles" involve cheap stuff such as hidden switches, which just feels much too lazy for a work of such high quality. Apart from that, there's never a boring moment and Mr The Killer never stops being fun. 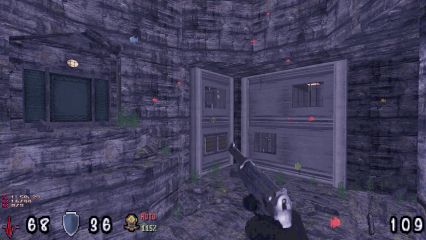 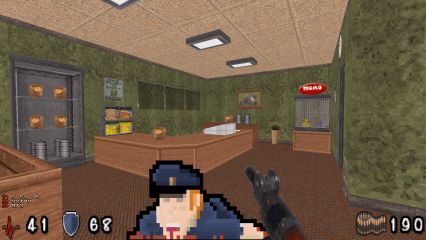 The second episode is only three maps long, but it introduces a gimmick: a layout randomization feature. This feature changes a few locations per level, altering the routes you take, depending on the results of a randomization object that's located at the start of each map. There are three iterations per level: I'd guess these change about 30% of a given map, keeping the rest of the map unaltered. The point here is to add replayability, but I was getting a bit fed up already on my third playthrough. (And since the layouts are randomized, you may not get the iteration you haven't tried yet, but you can just keep "rolling the dice" with save & load until you get the result you wanted.) It's certainly a new way of doing things, but I'm not sure it's a better solution than serving bigger maps outright. That there are 27 different ways to experience the episode makes for a nice marketing slogan, but realistically you only want to see the stuff you missed the last time.
The new maps are still very fun to play though and filled with all kinds of nifty little ideas. The only bigger design related problem has to do with lighting: the author has gone for Polymer-based lighting this time around, making the maps seem a bit bland without it. The Polymer lights look nice of course but sink the framerate, so I played the episode in Polymost while enabling Polymer every now and then to check the lighting.

In other regards the core gameplay stays the same and the second episode is a lot of fun to play with its silly theme and dark humor. Combat is satisfying; you need to be a bit more mindful of using cover and react faster than what you've gotten used to in Duke3D. That being said, I'm not the biggest fan of deadly hitscan enemies spawning out of doors and windows; that thing started to get a little bit old already in the first episode. (And it may be just me, but hitreg seemed a bit wonky from time to time.) Some new stuff has gotten added in, including a challenging, multi-stage boss battle against a mysterious antagonist and a new weapon that turns your enemies into birds. Also worth mentioning is the third map's soundtrack, which is really good (repetitive but in a good way). 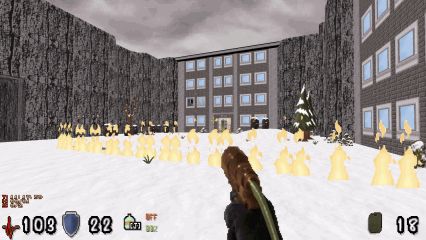 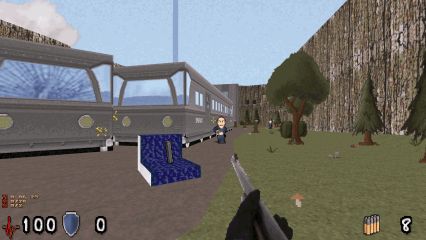