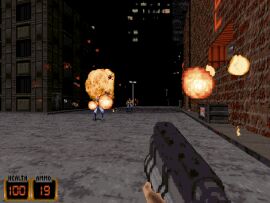 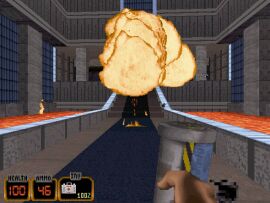 -Levels:
Merc 2 has two single-player episodes. Both episodes have six levels. Three of those twelve levels are Duke's house levels where there's this computer which you can use in order to know your mission. One of those twelve levels is very tiny (E3L5) and one of them is a boss level. So originally we had 12 levels but then we remove these 5 levels because we really can't count them as levels. So we have 7 levels to play - But in fact I only had five levels to play because two levels crashed in the beginning taking me back to windows. So I played five bigger levels and five very small levels. So my point is that this TC would have worked better with just one episode with one or two briefing levels, one boss level and seven bigger levels.
Level design is from poor to average. Two city levels are both ok but they lack in details & colors (mostly too dark). Cave level in second episode is quite poor quality as well as that canyon level (poor textures & details). Level 'Lab Rats' is a good one with ok design & details. This one small level looked good too but it just was too damn short (where you had to destroy that reactor).
Score 6/10

-Enemies:
Enemies look good. Palette is good so they don't look messy. Colors work well as well. They act much like the original enemies but they stay strickly on the ground (no flying ones). Sounds are interesting as well but a bit boring. There are also some civilians. They act ok and look ok and you can shoot them but they are too quiet.
Score 7/10 -Weapons:
Not much con changes but arts are different. Art is very good with good colors & details. Pipe Bomb have been enchanced with extra explosions and shrinker shoots some electric sparks now. Freezer is a nice flamethrower.
Score 8/10 -Other:
Sounds are pretty much ok as well as music (which I was somehow able to play partly). There aren't much new textures which is just a good thing. Both end-of-episode animations were pretty well made.
Score 7˝/10 Lastability: This might have worked better some years ago but not now. Levels - the most important factor in TCs - are quite boring:
WWW: http://merc.totalconversions.com
Version: v1.4
Author: TCM (The Total Conversion Masters)
Size: 18Mt
Score: 6