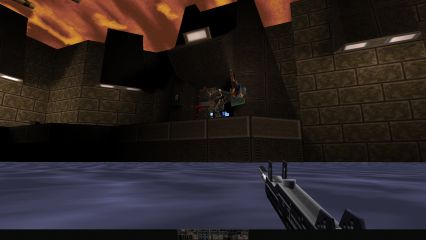 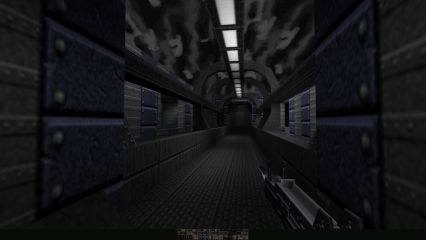 This is kind of a weird "game" (a commercial Total Conversion for Quake, in fact) in that it left a lasting impression on me back in the day despite not really being

First, a few technical notes. The game runs just fine in ports such as FitzQuake and QuakeSpasm, but I couldn't get the CD soundtrack to play in QuakeSpasm unless I used the quakespasm-sdl12 executable (I launched the game with -width 1920 -height 1080 -bpp32 -fullscreen -game malice in the shortcut). The game has several new features, so you need to bind them (it's all explained in the readme, but we know no one reads those anyway). These are impulses 12, 13, 14 and 30 for Reload, Use, Cycle Inventory and 3rd person view, respectively (so type bind r "impulse 12" in the console to assign r to reload, for example). Other useful console commands are "volume" (if music is too loud and you want to increase the volume of sound effects accordingly), "gamma" and "crosshair 1". Be aware of the new features such as the parachute, as you're pretty much required to use it several times. You need to be mindful of being able to push some crates as well; do not look down as you're pushing, as it won't work then. The first map is a training facility that introduces all the new features, so take some time with it (even if it has a rather horrendous layout).

Advertised as a "23rd Century Ultraconversion", very little is left of the original Quake aside from a few sound effects. You play as Damage, a mercenary who works for a weird-looking crimeboss in the year 2304. Damage is a bandana-wearing badass, but essentially works for free on a vague and extremely unreliable promise of a future payment. This being a game from 1997, one shouldn't expect too much from a story, but the one in Malice is actually delivered with plenty of cool attitude and even some decent voiceacting. Quake itself had great ambitions, but it got turned into a generic shooter at the last minute, frustrating the likes of John Romero (whose unconstrained vision was then allowed to result in Daikatana). Malice's use of cutscenes exhibit some of the engine's surprising capabilities; no wonder, as Quake always played more like a techdemo than a proper single-player experience. I'd even argue that Malice was way ahead of its time. 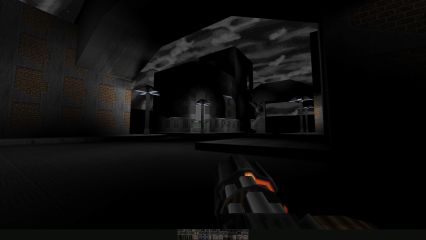 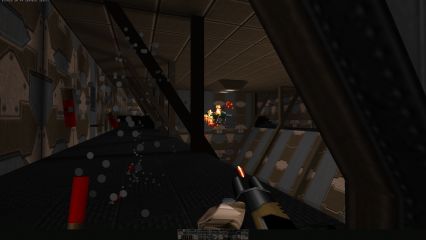 The game's most prominent feature is its combat; your arsenal is freaking awesome. Not only is every weapon useful, but they sound absolutely fantastic and killing things with them is very satisfying. The enemies, of which there is a colorful selection of personalities, are deadly, but combat is always fair and balanced. The only small complaint I can think of is that there's often not enough room to use the grenade launcher. Oh, and the starting pistol is so much fun to use that you find yourself relying on it even when you've got better weapons at your disposal, which is in stark contrast to other starting weapons of the era. (Just remember to bind that reload key, although you can also "reload" by switching weapons, which is in fact often faster than reloading.) And, aside from robots that appear in the penultimate map (and resemble those ABC Warriors from the '90s Judge Dredd movie/videogame), the enemies don't take a million bullets to kill.

There are around 20 new maps. They look pretty good with a dystopian futuristic feel to them but also very generic; the overwhelming majority are various hi-tech bases and facilities. One had a submarine, so it must've been a submarine base. Another had plenty of water, so it was an underwater facility - and the one with lava must've been a foundry. And while I just praised the engine's capabilities, it seems to have difficulties translating into realistic-looking city maps. Not that Quake itself was any less generic, but Duke3D taught us to expect more. Another perennial issue is lighting. While everything being kinda dark and grey is a part of the game's appeal and identity, those pitch-black corners, often with enemies in them, are just a no-no. Luckily there are settings you can adjust to alleviate this. Furthermore, layouts are often confusing and the environments are not spacious enough to accommodate the game's fast running speed (not to mention the way running is handled in Malice is bugged). One thing you might not expect from a Quake TC is being able to destroy environmental objects; Quake was notorious for its static environments, especially compared to Duke3D. Thus, a good tip to keep in mind while playing Malice is to shoot at things such as crates to see if blue sparks fly; that's a sign of an object being destructible. Also, Quake had no proper "use" key, so you activate objects by either shooting or pushing them.

There are also some real faux pas bits, such as a lava pipe that you just can't walk through without losing health (well, it is possible but very difficult to pull off). The most disappointing of these design-related blunders is game-breaking. Remember me telling you not to forget that you have the parachute? Well, in the underwater map they simply forgot to add one in, so either you get a patch in advance or use noclip/fly to get past the part safely. And the less is said about the amount of trial and error involved in the final boss battle the better.

Conclusion: Team Epochalypse, essentially a bunch of hobbyists, took Quake by the balls and utilized the under-utilized capabilities of the engine in creating the most total of Total Conversions. To me Malice, with its distinct dystopian looks and a soundtrack that quickly became a big personal favorite of mine, has always been a strong presence even if I barely touched it between 1997 and 2020. That being said, issues related to map design make it all too obvious that this is still the work of hobbyists. Malice becomes more enjoyable on further playthroughs when you're already familiar with its shortcomings, but your first playthrough will often be marked by frustration and leave you conflicted about the game's quality. Still, throughout its shortcomings, Malice always maintains its distinct coolness factor thanks to its awesome combat, excellent use of cutscenes, dystopian ambiance and one of the best videogame soundtracks ever.

(Note: A version with the soundtrack is available here. This version also supposedly fixes several bugs, including the missing parachute in the underwater map, and adds a flashlight. I only took a quick look at this version though, as I played the original for this review.) 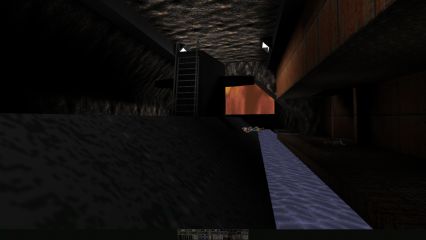 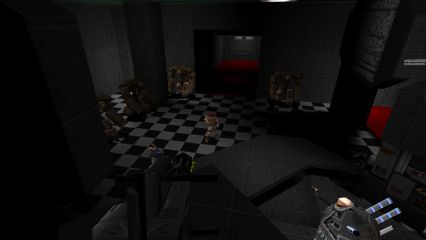