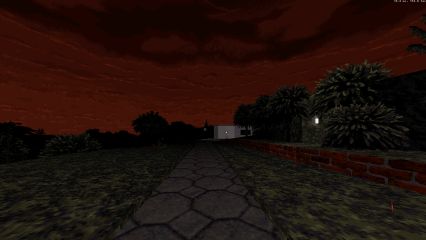 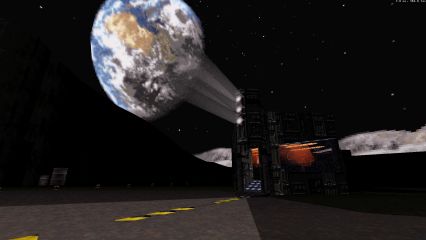 Joaquina's Horror Tale is a four-map DukePlus mini-mod, released just in time for Halloween. Duke's had plenty of horror-themed maps over the years, but this is one of the few "survival horror" takes in the game. Some of the game's stock features have been disabled or scaled back, and at the start of the episode you find yourself in a house surrounded by monsters with no weapons in sight. Sure enough, it doesn't take too long to get your hands on some guns and start blasting your way through hordes of aliens like in the good old days, but the early survival horror impression kinda sticks.

The mod imposes several restrictions on you. Automap, sprinting and the crosshair have all been disabled. For sure, you can get around these restrictions with little effort, but you probably should play the mod the way the author intended. All of these have a rather significant effect on the gameplay, but I'll get into that a bit later.

The first map is your house, surrounded by thick vegetation. The map is quite dark outdoors to the point that navigation becomes an issue, especially considering the automap has been disabled. In fact, the author has chosen specific gamma & such values for the mod. Sure, you can tinker with these all you like, but it has the effect of making the map look washed out. There are paths in every direction, and your navigation is further hindered by vegetation getting in your way and several Battlelords camping at the edges of the map. I'd have wished for a bit more straightforward navigation, but overall the map is still fun to play and explore (especially the house which has a pretty good layout), and there isn't anything terribly unfair about the "puzzles" (although I got stuck here and had to cheat my way out). Combat can be a bit erratic; there are some dangerous variants of regular monsters waiting to ambush you, and some of these are hard to spot due to transparency effects combined with low visibility. You're at a disadvantage for not knowing how they're going to behave, but the map makes up for that by being pretty generous with health and tends to reward handsomely for exploration.

The second map takes place aboard a spaceship. This is just a short intermezzo with not much to write home about either way, but I do wish more mods made use of such small maps situated between bigger maps for the sake of pacing.

The third map takes you to the Moon. I'm not sure if Duke is dreaming or what (a video clip included with the mod indicates Duke "passed away"; I'm sure "passed out" is what the author was going for, but who knows, maybe Duke died and went to Hell?), but this place has plenty of otherwordly weird stuff. There's just something about the author's style that makes these maps feel both original (no small accomplishment in this day and age) and somewhat oppressive. You can't quite tell if it's merely the aliens or if the aliens have brought something else with them. Combat is well balanced and less affected by visibility and space issues than in the first map. There's a rather large battle near the end, but it's up to you whether to engage or run like hell; I went for a hybrid approach, first thinning the horde, then running past the rest.

The fourth map had me puzzled. Was this intended as a gimmick, an endless map? What started off as a cool comeback scenario ended up having me frustrated. Running around the map with that reduced running speed, carrying blue & yellow keys without having any ideas where to shove them, I did what I basically never do and just quit the game at this point, thus never having "properly" finished it. Or maybe that's the way it was intended, but it sure didn't feel like a proper ending.

As for all the other stuff, each map is accompanied by new music, and that music plays no small part in the maps' oppressive, otherwordly atmosphere. The maps may occasionally look a bit cramped and messy, but they have plenty of interesting details, some epic sights and make good use of voxels. DukePlus features are quite prominent and the maps benefit a lot from the altered monsters; vanilla ones would just feel wrong here (which is something I don't say often).

However, the restrictions mentioned earlier are most definitely a drag. These may have seemed like a good idea, but the author would be lacking the ability to view the maps with a pair of fresh eyes. The rest of us often don't know where we're supposed to be going, so taking away the automap and forcing the player to walk at a noticeably reduced speed gets tedious quite fast. One thing I dislike about some modern games are scenes where the player is forced to move at a reduced speed; this one feels like that, only constantly rather than just occasionally. One particular scene in the Moon map involves lots of jumping and thus is significantly affected by the reduced running speed, so it just ends up feeling like you're fighting this "force" that's keeping you down. If the mod were significantly longer you could get used to it, but this is basically the one and only bit involving heavy jumping.
The lack of a crosshair is the least of these problems, but it too becomes an annoyance in the Moon map. This map has several areas with a ton of open space and Pig Cop Tanks in the distance; trying to hit them with the RPG is interesting to say the least. Maybe the author wanted this to be a "thing", but while the yellow crosshair may seem like an unrealistic thing to have, I always thought it was there to compensate for the lack of ADS in the game; realistically you would always know where your gun is pointing.

Conclusion: An interesting and original "survival horror" mini-episode with four maps soaked in a wonderfully oppressive atmosphere. However, the gameplay suffers significantly from the restrictions imposed on the player. 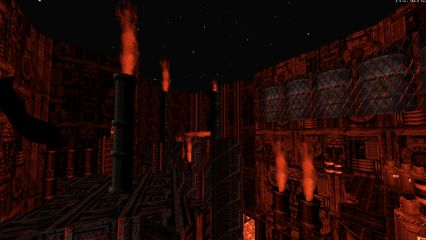 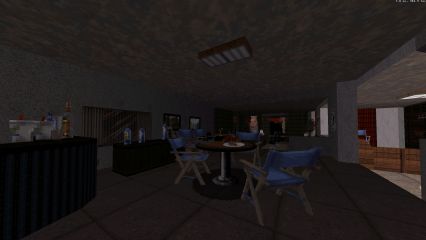