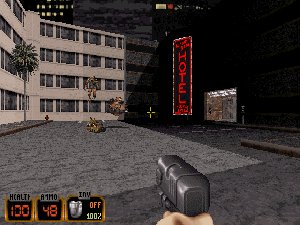 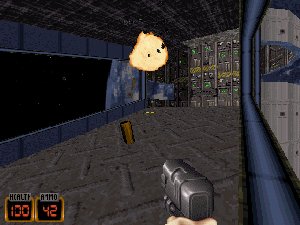 -Levels:
That's all what this TC has to offer: Levels. Authors have created 18 levels for this TC
which includes three episodes. There are few space maps and all others are city maps. These
maps are all familiar because they are copying a lot from Duke's original maps. That works
quite well. Anyway some of the first levels are buggy and not very well designed. Best levels
can be founded from third episode. Design is sometimes above average and sometimes below but
shadows are excellent. Anyway these levels doesn't offer anything special or new.
Score 7/10

-Enemies:
Well new features are The Fish which is like a shark but smaller and it doesn't bite and you
can't shoot it. It just swims happily around some of the pools in a game. Another new feature
is that scorpion tank thats art can be founded from atomic edition's tiles but it was never used
with the final version of the original game. Anyway the version in JJ shoots rarely and looks quite
cheap. If you are gonna include enemies to your TC then do it well.
Score 5/10 -Weapons:
JJ doesn't include new weapons

-Other:
There are few new sounds like city street sounds but nothing else. New art includes only some
sprites and nude pics. Nothing serious or new has been added.
Score 6/10