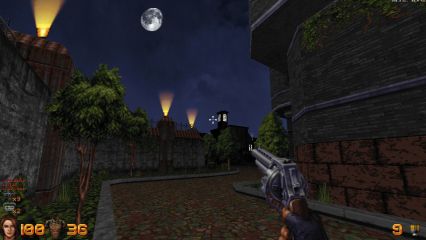 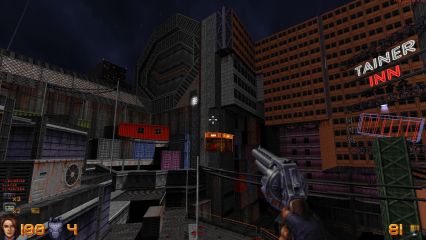 The character of Bombshell started its life as a concept, with unmistakable '90s proportions, in some early version of Duke Nukem Forever. After an ill-fated detour in an isometric shooter that was both a critical and commercial failure, Shelly "Bombshell" Harrison has returned to her first-person roots. In a story that is as one-dimensional as any from the greatest shooters of the '90s, Doctor Heskel, a fanatical transhumanist, is wrecking havoc in Neo DC, and it's up to Shelly to save the day.
With its target audience consisting of fanatical oldskool gamers of the worst kind, expectations for Ion Fury (renamed from Ion Maiden after Iron Maiden's lawyers threw a fit) were quite high. Could the team behind Ion Fury, Voidpoint, consisting of some of the finest designers the Duke3D community has to offer, fail to deliver?

If you're reading this, there's a good chance you're primarily interested in the maps. Ion Fury consists of seven thematically distinct zones, each divided into several areas (of which there are nearly 30 in the game). DavoX's handprint is all over the first two zones. He's at his best crafting futuristic cityscapes with plenty of neon lights and colors. These maps make great use of height differentials and sloped architecture. Detailed skyboxes inspired by sci-fi classics further enhance the epic atmosphere of Neo DC, and the segment ends with a GDF base filled with slick, futuristic design. In the third zone Shelly climbs up Heskel's high-rise business empire. The zone has a nice sense of progression as you make your way through the building all the way up to Heskel's penthouse. Repetition never gets to sink in as the building packs quite a bit of variety. One detail I loved in particular is how you could view the zone's first street area from up high.
The fourth zone starts with Shelly on board a train. It's your usual Build-engine train map (albeit with some cool skybox effects thrown in), but somehow you can never go wrong with these. What follows is an extensive system of subway tunnels. On the surface it's the kind of a boring setting that in many cases would result in boring gameplay, but here it's a refreshing switch from the more open and colorful (even disorientingly so) areas of the previous zones, and the zone's polished and elegant use of texturing and details makes it a real pleasure to walk through. Also, contrary to expectations, the tunnel network is easy to navigate and has a generous, realistic sense of scale. The fifth zone brings Shelly back out in the open. The zone's first map is gorgeous with its soothing landscapes; it's also disappointingly the only map taking place in a natural environment. The zone's second map, a water-treatment plant, is your first introduction to zombies; these guys are everywhere, and at first they're a lot of fun to kill. The atmosphere and pacing are slightly more relaxed within these tunnels and there's plenty of awesome industrial machinery around the place. The area also makes great use of underwater segments to bring some much-needed flavor. Heskel's mansion is another stand-out map with plenty of enjoyable close-quarters combat, and the mansion's exteriors are among the game's visual high points. Design continues to be outstanding in the sixth and seventh chapters where Shelly traverses Heskel's underground base, but gameplay-wise the emphasis on zombies gets a bit nagging. Still, there's plenty of fun to be had here, especially in the second map of the sixth zone with its environmental hazards.

As for gameplay, obviously there won't be anything beyond shooting things - plenty of things - and hunting for keys and buttons. There's the occasional new(ish) gimmick to keep things fresh, but Ion Fury has no aspirations to be a modern game. Thus, don't expect cutscenes, NPCs that tag along or anything of that sort. Of course, there's nothing wrong with this; Ion Fury is a ton of fun to play in all its uncompromising simplicity. Shelly's arsenal is among the most satisfying in shooters with plenty of firepower and some extremely useful alternative fire modes. At one point I was about to grow tired of the lack of enemy variety, but it then got better almost immediately with the introduction of a few more badguys, including some real nasty ones. (That being said, the zombie spam started to get a bit tiresome in the 6th zone, especially since they're by far the least threatening enemy type in the game.) The game is at its best when you're "in the zone", jumping into a room full of badguys and quickly switching weapons according to the needs of a given situation. Both ammo and health are plentiful, but so are enemies, to the degree that at least on Ultra-Viscera I never felt like I had too much stuff (though I admit I suck at finding secrets). Shelly's running speed is also noticeably high, a feature that I thoroughly enjoyed; it kinda reminded of the tense, restless pace of the 1999 Aliens versus Predator.
As in '90s shooters, the action is constant; there's no downtime, "atmospheric" exploration or story segments. The maps are also quite long, with each zone being more than an hour long and consisting of hundreds of enemies. If you feel like the action is starting to wear you down, don't force yourself to play more; save some for later. I found Ion Fury most enjoyable when played one zone at a time. 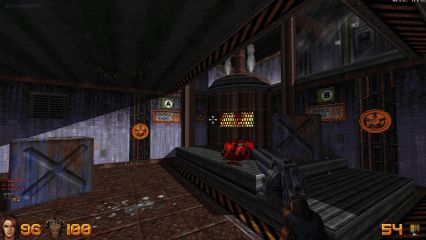 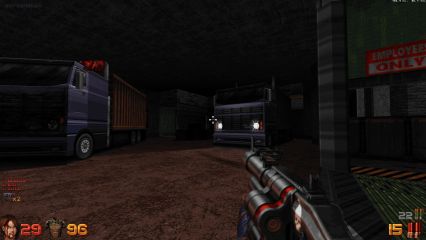 As for the rest of the game's presentation, Ion Fury delivers a solid ten out of ten. The soundtrack is really good. I couldn't quite put my finger on it; on the one hand it had a definite retro ambience, but on the other it's nothing you'd expect to hear in an old game. I could detect vibes of various soundtracks, even Jazz Jackrabbit and elements reminiscent of Sega Mega Drive's unique sound, and yet the soundtrack always managed to sound original (well, except for that E-Type melody in the secret map). Maybe it works so well because it's the perfect fusion of all the best elements out there, kinda like Cartman's assburgers. Most of all, whatever tune was playing in the background always felt like the perfect fit for the occasion. Other audio work is great as well; all the weapons sound satisfying and voice acting is delivered with a lot of confidence and "edgy" '90s attitude (and the one-liners include quite a few gems for those of us who grew up with late 20th-century pop culture). Ion Fury's impressive set of textures give the game its distinct, sleek look that is both retro and modern, and its consistency suggests the art is from the brush of a single person.

But let's not get carried away: there are some issues too, a few of them considerable. First major issue is visibility. Many areas in the game suffer from visibility so low that it engulfs enemies in the distance in darkness no matter the actual brightness of these areas. This is a feature (but by no means mandatory) of pre-Quake games whereby a fully lit area might look pitch black if you're ten meters away. Worse yet, as in Duke3D, enemies hidden by the black shroud have no trouble seeing you. Some of the one-hit-kill enemies in Ion Fury exacerbate the issue; you'll often have grenades flying at you from pitch-black areas, and those red riding hoods situated or spawning in elevated, darkened positions can be a real pain in the first zone.
Another major issue is the game's framerate. While it was, say, smooth enough for the overwhelming majority of the game (although never really what you should expect), it tanked to the low 10s at the worst possible times, namely during the boss battles of zones 2, 3 and 7, making the battles a very excruciating experience for all the wrong reasons. Why I'm getting a much better performance out of Rise of the Tomb Raider, a known resource-hog, at high settings is a question worth asking.
As for more minor complaints, I would have liked more HUD options. As it is now, you cannot see your ammo count for the various weapons without switching to them. Some enemies are rather annoying, such as a certain mecha that shoots not only hitscan bullets but also a tidal wave of tiny grenades that bounce around and are hard to see until you get hit. I also had a nasty habit of picking up powerups when I no longer needed them; making their consumption manual as in Duke3D would help a lot (not to mention I almost never could find any good use for the jump boots or the radar).

Conclusion: Ion Fury is a game where everything from gameplay to design just "clicks". Not only does it feel polished, slick, fast and fun, but there's also plenty of Build-engine "porn" to go around that at its best has the same effect as Brandi Love's smile. That being said, the game's framerate is not good enough for a commercial tile, there are recurring visibility issues and the end game could have benefited from introducing a new enemy or a gimmick rather than relying so much on zombies. Anyway, at ten hours long and with plenty of secrets (and soon-to-be-implemented achievements) adding considerable replay value, Ion Fury is an absolute bargain at its launch price. If Voidpoint set out to prove that Build/EDuke32 is a viable platform for video games in 2019, they succeeded. 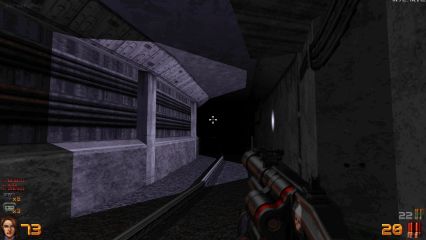 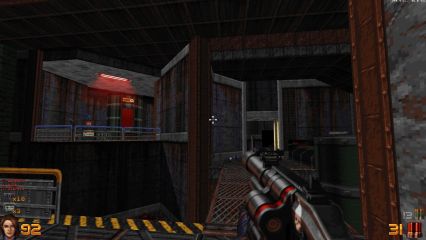 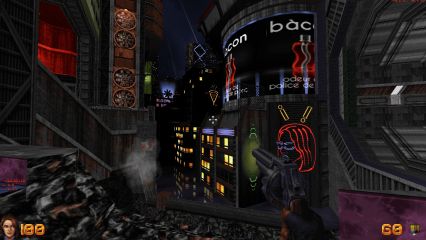 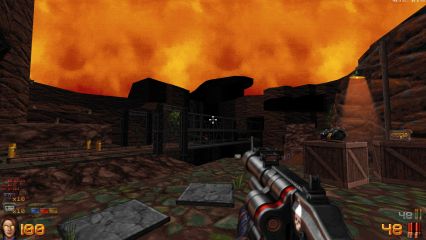