Imperium by the Imperium team 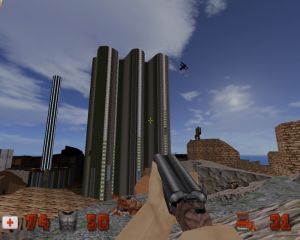 Imperium has been worked on for quite a while now and sometimes it seemed that it would go the way of most big projects but the epoch we live in is an epoch where Duke Nukem Forever is no longer a runnning joke... wait, scratch that. Anyways, a group of distinguished mappers with similar styles joined forces to create a modern Duke3D epic. Imperium is an 8-map episode powered by DeeperThought's DukePlus.

The human race has expanded into the vast emptiness of space, colonizing countless worlds only to have ended up fighting aliens again. The only one who can save the day is Duke, who has apparently managed to live hundreds of years to witness another war between humans and aliens. This backstory is played out rather well in the mod, delivered in the usual fashion via viewscreens. It also ties the maps together in a seemingly seamless manner. What's new is that the utilization of DukePlus has allowed the authors to create several story-driving cutscenes, most notably the voice-overed prologue which reminded me of the classic Unreal Tournament intro. 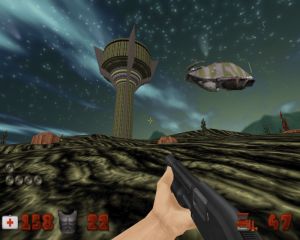 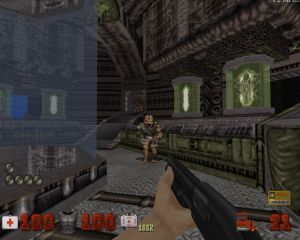 But it's the maps that sell and Imperium consists of nothing but high-quality ones. They're all a bit Unreal-like, awe-inspiring and Conceptually Grand. The maps are mostly medium-size even if they seem huge and, contrary to my initial expectations, the maps actually have a moderate amount of enemies, which is to my liking. Here's a breakdown:
-Lost Planet: A good introductory map that presents some new features (including pathways revealed by goggles) which you may be familiar with if you have played DukePlus before. In typical William Gee fashion, the map consists of several stunning outdoor areas. Once you climb out of your space ship, you have a chance to either autopilot a Skycar to a given destination or make your way there on foot. Choosing the Skycar skips a third of the map and since you don't get to control it anyway, its inclusion seems unnecessary and forced.
-Hidden Benath: A cave map that bears some resemblance to a section by the same author in DPCBP. The underground river system has a nice realistic look and the map's alien-tech parts are impressive but generally speaking this is one of the least mind-blowing maps in the pack (which is more telling of the pack's overall quality).
-Alien Tower: Numan, the author, disappeared from the mapping scene soon after his impressive Beerzity. Featuring a large outdoor area with a gigantic alien structure, this map is quite nonlinear and should go down well with those who love to explore. The last third of the map consists of refreshing vertical action and it is in this map that you meet the "Super Trooper" for the first time, a nasty Skaarj-like variant of the Assault foot soldier.
-Alien Space Fortress: A huge Alien mothership map that instantly reminded me of such classics as Alien Wipeout, WGAlien, Pipeline's Mothership and several of Zaxtor's Oblivion maps. The mothership is filled with blinking lights, rich colors and weird alien machinery.
-The Last Chance (two maps): My favorite maps in the pack. An EDF ship is under alien attack. While you're too late to help the crew, the least you can do is blow up the ship. The first part has you witnessing destruction while helplessly listening to radio chatter describing the futility of the situation. Thanks to DukePlus, gone are the days when your buddies had to consist of dead bodies or obscure references. Now the ongoing conflict is not only hinted at; it's there for you to see. When you get to what is basically the basement section of the ship, the map instantly takes you to the "Red zone", the moment you've been waiting for ever since you saw Merlijn's name in the credits.
-X64-2: The fascinating Xen-like alien world from Alien Planet X64-2 is back. In a scene similar to WGRealms 2, Duke is about to be executed by a Commander until he breaks free and starts exploring the weird planet, the calmness of which stands in stark contrast to some of the previous maps.
-Mountains of Madness: This is a small boss map by KaiseR, and a fitting one for that purpose, featuring the famous Alien communications tower from some of the early screenshots. The ending is not completely satisfactory, however, as the cutscene that you were expecting never comes.

It's worth noting that every music track in Imperium is custom-made by the Oostrum brothers. These tracks include some very good ambient tunes that fit particularly well and add to the secluded, isolated feel of some of the maps. There were melodies that reminded me of such games as Unreal and Ecco the Dolphin, both praised for their exceptional soundtracks. Other new material includes textures, sounds and two new weapons, a railgun-like cannon that has a powerful BFG-like secondary fire, and a powerful minigun, an ideal choice when you need to get rid of large masses quickly.

Imperium supports both the High Resolution Pack and normal Polymost graphics but I experienced some major slowdowns in some of the maps' open areas, particularly in the very last map. This despite the fact that I wasn't even using the HRP. Imperium, however, does force some high-poly models to be displayed. It should also be noted that the latest HRP version works only with Polymer (don't confuse this with Polymost; Polymer refers to the new renderer that supports "modern" lighting effects) which pretty much means that every ATI user should stay away from the current HRP version. But don't worry; even with normal Polymost graphics the maps look amazing and the inclusion of some hi-resolution graphics (such as skyboxes) is well justified.

Besides this technical problem there are only some small annoyances that are mostly DukePlus related such as Chaingun overheating (which can render you pretty helpless in tough situations), difficulties with mantling when trying to get out of water and forced autosaves that are more trouble than they're worth (unless you happen to suffer from Alzheimer which constantly causes you to forget manual saving), often costing several dozen health points or even leading to your death because of sudden fps spikes.

Conclusion: If Duke Nukem Forever wasn't quite worth the wait, Imperium certainly was. It doesn't just consist of eight new maps but those maps are among the best of the best. A good backstory, an excellent soundtrack and some much-needed DP effects are tied together in a way that leaves little to complain about. 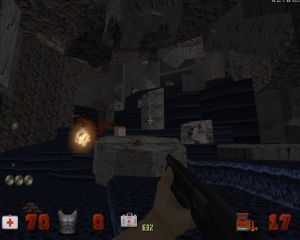 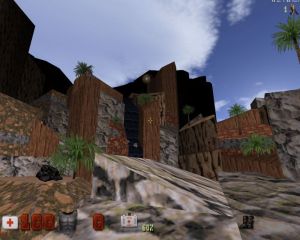