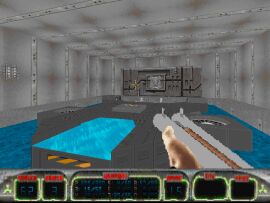 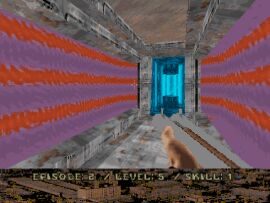 -Levels:
All three episodes. Levels in first episode are very small & easy. Almost the same could be said about the second episode. Design in first episode is a bit poor but you can see some development in the final levels of episode 2. Gameplay & puzzles are very easy & fun. I have never loved three-episode-TCs with huge levels. Levels have some nice variety. There are different sort of space levels for example. Some of them are your own bases or planets. You'll see lots of outdoor areas with rocks, plants & colored lighting. There are cool spaceships with some nice sequences such as fueling the system or falling down from a spaceship to a pool. City levels are colorful with multiply locations. In third episode there are some nice underwater places & bases. Levels are filled with new stuff such as Bob's clearwater effects and some mirror floors & even snow. Lots of textures have been ripped from Shadow Warrior, Quake 2 etc. There's a whole Q2 themed level in third episode. Lots of fun.
Score 7˝/10

-Enemies:
Enemies look quite messy with bad palette settings. Normal enemies are similar to marine soldiers in Quake 2. There are also some hi-tech robots (some bigger some smaller) - you'll also notice those 'crane' creatures from 'Asylum' level. Sounds are great & hilarious. The fact that they look bad doesn't bother here.
Score 7/10 -Weapons:
Weapons are all new with new great sounds & poor graphics. Actually the details & shape of the weapons is good but coloring is a bit lame (take a look at shotgun or RPG). But these guns fit with the rest of the pack so well that bad quality art doesn't matter.
Score 7/10 -Other:
Lots of new sounds, music (which I'm not able to hear even I'd like to) & art. Art is bad or messy or ripped from other games but it fits here and gives this TC a nice feel. Sounds are all great even James sounds like a fourteen year old teen (which he is). Very neat sounds I'd say.
Score 9/10 Lastability: James has created this extremely fun TC all by himself. It has ok level design, lots of variety, poor quality art (for enemies, weapons & textures) which in fact - is great, great sounds, great stuff etc. Too bad it's only for 1.3d:
WWW: www.geocities.com/jstanf35 & http://amc.ttnetwk.com
Version: v1.3d
Author: James Stanfield
Size: 19Mt
Score: 8