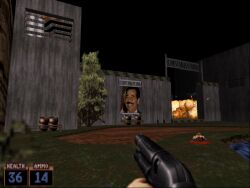 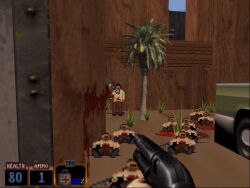 First Person Shooter veterans know everything there is to know about wars. Maybe that's why the US military is using games to train soldiers. In reality the sectarian violence in Iraq could be ended easily by sending just one man to blast the air out of the infidels.
Like "Quest for Al-Qaeda", "Quest for Hussein" could also go down in history as a boring mini-game but thanks to its level design (by our own Fakir & Kef) Quest for Hussein is actually a worthy add-on.

(In fact, Quest is not an add-on. You can run it without Duke3D but I strongly recommend XP users to play it with some Duke3D port. If you use EDuke32, simply copy EDuke32.exe to your Hussein directory and rename the grp to Duke3d.grp.)

Hussein borrows a lot from the classic Platoon TC but was no doubt done in a hurry and has a lot less variety. Each level should take no more than 3-4 minutes. There is only one enemy type and it keeps chanting the same "hamamamama" litany all the time (it's funny the first time you hear it but after that it gets annoying).

This could actually have been a good one but the levels are short and there are only six of them. This wouldn't have been such a problem had there been more than just one enemy type and a bit more variety. Now the going gets repetitive since all you do is walk and kill. Points for the levels & attitude. 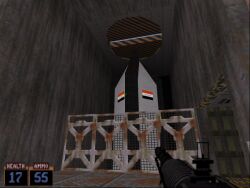 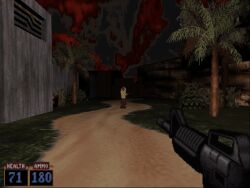