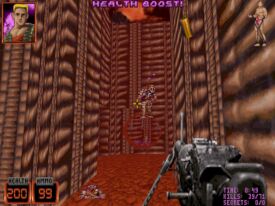 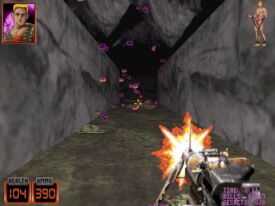 James and Geoffrey joined their male members together in order to create the gayest mod ever. HardG has a bit over a dozen levels. In each of the levels your task is to free four chained, rock-hard (Geoffrey must have had a time of his life drawing those penises) dudes. Health packs are now male symbols & lube bottles and blood has turned into a stream of purple hearts. The levels are mazes that consist of small square shaped rooms and every level has a different (well, almost every level) texture theme. There is no architecture - just rooms with monsters.

Needless to say, the going gets very repetitive. Getting lost is not such as issue for as long as you remember to use the automap. But once you do get lost (=miss a chained dude) you're in for some serious backtracking. The levels are full of enemies and ammo. Honestly, I don't remember dying at all. The last level is huge, taking nearly twenty minutes of your precious time. Most other levels should take no more than a few minutes. The soundtrack was m'kay.

So, this is what two Pet Shop Boys fans can do within 24 hours. But hey - it's a joke mod so feel free to take a look. Points for the gayest idea ever and for the cool submachine gun. Released on April Fools' Day (reviewed on 21st of April, 2007). 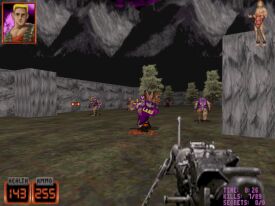 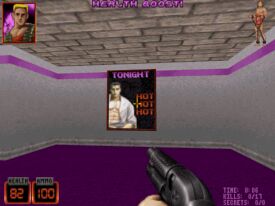