Instability in Mexico leads to an intervention by American forces. Bound by a joint security treaty and using somewhat futuristic toys the Ghosts must restore stability and order to the streets of Mexico City (which is where all the action takes place). Like the first Ghost Recon game, Advanced Warfighter heavily emphasizes outdoor (in an urban jungle this time) action and squad-based tactics. 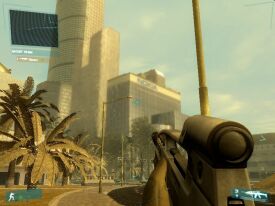 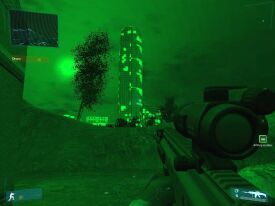 Every level is set within Mexico City and it shows. The levels are full of landmarks, skyscrapers, parks and other stuff you'd expect to find from a huge city - except people. The streets are empty - the few VIPs you must rescue every now and then are the only civilians you'll encounter. With this level of AI I don't regret that civilians were left out. The levels are huge and filled with numerous objectives. Some of the missions are very good and most of the levels are atmospheric. Some have complained about the few maps where you're pretty much forced to use night vision goggles but I found myself enjoying these maps. In some levels you're also given a chance to order Apaches, artilleries and tanks. There's also this cool drone thing that flies across the skies according to your wishes, spotting enemies. It's a very handy tool but I wouldn't trust the thing too much. There's a Tactical Map with which you can give orders (of course you can also give orders simply by pointing and clicking the mouse). The Map is a cool tool, just like in the original Ghost Recon, but just too bad the AI is sometimes so damn terrible that it won't do a thing you ask. 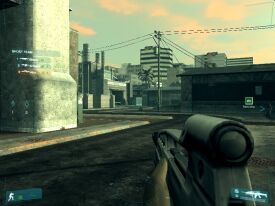 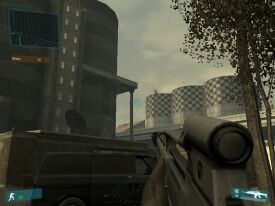 With all the good things in mind, there's just one problem with the game and that is the heart - gameplay. First, the NPC AI is terrible. Your squad sometimes ignores direct orders and behaves in a combat situation as if there were no enemies in sight (like pointing their backs toward enemy fire). The second last level got frustrating near the end when the tanks got stuck in corners and refused to attack enemy tanks. The AI troops sometimes seem completely unable to follow the most obvious path. If you start running, you can order your squad to follow but they do so at a much slower pace. This means you have to sit and wait for your mates all the time. Sometimes your mates pick the most non-obvious path when you order them to regroup. Once my whole squad ended up outside the gameplay area and could not return. The enemy AI is not as bad but not that good either and luckily so because now at least your own squad of dimwits is able to challenge them. The game is quite hard even when playing on the easiest setting. Sometimes the enemy does stupid things that get them killed and sometimes the enemy is able to spot you miles away from his position even when it's dark and you're the only one carrying night vision goggles.
This all ends up being very frustrating when the save game function is based on checkpoints. You may end up repeating ten-minute scenes over and over again which is particularly frustrating and not so rewarding when the most fatal mistakes are committed by the AI. I must have tried the last part of the third level a million times. It was much harder than the last Assault level of UT2004. Also, the movements are far from smooth. If Counter-Strike is smooth and BF2 somewhat sluggish then Advanced Warfighter is even worse than Operation Flashpoint.
The game also relies heavily on having a wheeled mouse, which I don't have. At first, I was unable to select any other than the main weapon because you were able to select a weapon only by using the wheel (there was no option to bind the keys according to your wishes). Luckily, this was fixed in the first official patch.
As some PCZone reviewer once said in his review of Daikatana, "I have had better times licking toilet floors."

Conclusion: Nevertheless, the game ain't so bad. The levels look and feel - at least when they're not just irritating - pretty amazing and shooting orders is a nice hobby. GRAW manages to simulate urban warfare with great success. Just that many of its annoyances are hard to overcome. 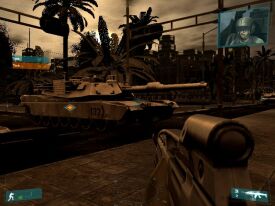 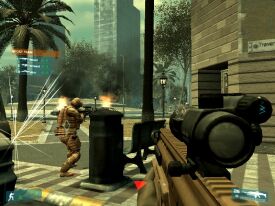