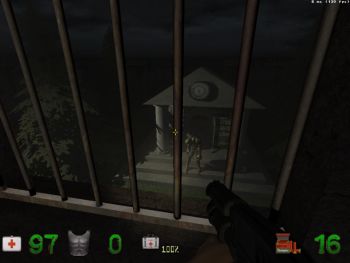 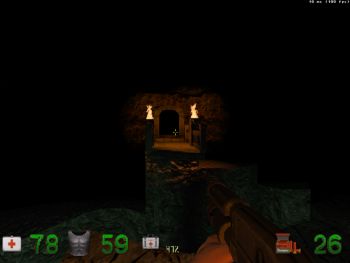 A man's car breaks down in the middle of the night near a graveyard. The man decides to venture into the graveyard. It's probably safe to say everyone knows where this is going. That's the premise of Graveyard, a four-map mini-mod. This being a Polymer project, some decent computing power is required to run it. I got a decent performance out of it after significantly cutting down the resolution: there were spots where the framerate was smooth and spots where it hit below 20. (As a sidenote, this is the last Polymer project I'll be playing on my old HD6870; I've got a new R9 380 GPU waiting to replace the old GPU in a few days, but even that probably isn't going to be enough to tame Polymer.)

The maps rely heavily on Polymer lighting and the use of models as decoratives; geometry itself is rather blocky and basic. Lighting is effectively used throughout the pack, and nicely demonstrates the capabilities of Polymer. All the new models also blend in nicely with both the geometry and lighting. Darkness engulfs more or less every area of every map but it never really becomes an annoyance mostly due to the fact that the player has been given a flashlight to illuminate those seemingly neverending dark hallways. Still, there are quite a few bits where the player is left wondering where to go. While some might consider this "exploration" I'd rather quote the AVGN and call it "Where the fuck do I go?" kind of map design that should have been left in the mid '90s. For example, what at first seems like a buggy boss fight at the end of map 3 turns out to have been a simple door trigger. (The very same area has an important path hidden in a relatively dark corner.)

Monsters are a collection of skeletons and zombies which really aren't my favorite type of enemies but naturally they make thematic sense here. Most of the time you'll be walking with a pistol and a shotgun, and while shooting things with the shotgun is somewhat satisfying, you're kinda left wanting something a bit faster. Unfortunately the automatic rifle you were expecting to get your hands on sooner or later never shows up. The mod's overall ambience is a rather weird mix of horror and camp with its cliché monsters and a few good jokes thrown in every now and then. Most of the time it works, especially at the ending, but often you're left wishing for a scarier experience.

Conclusion: Graveyard is a decent Polymer-heavy mod that makes good use of lighting and its horror theme but suffers from mediocre combat. It's also a bit schizo about whether it wants to be horror or comedy, and seems to settle for something between the two. 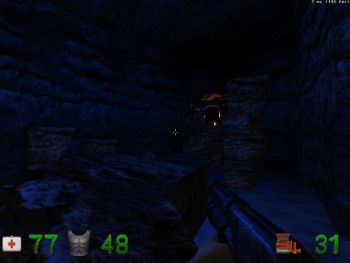 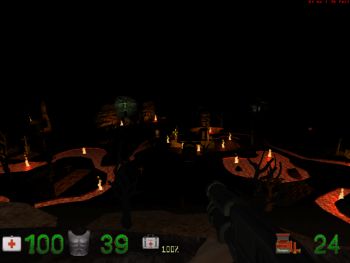