Bought Ghost Recon the moment it was released back in -02, completed it, sold it and last March I had to buy it again since I could get the game & its two mission packs (Desert Siege & Island Thunder) for only five euros.

While Rainbow 6 is more about special forces dealing with terrorists in closed areas Ghost Recon is more about large scale operations in the middle of a war in the former Soviet region (Russia, Georgia, Baltic). It's a step toward Flashpoint but it simulates special forces a bit better (you can't drive vehicles). 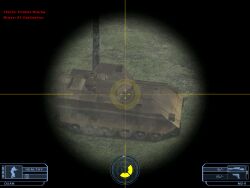 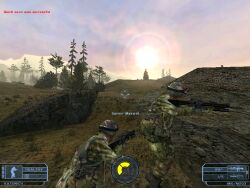 Compared to Rainbow Six games there's less variety in terms of locations. Ghosts mostly deal with Ultranationalists (Russians longing for the days of the old Soviet Empire) outdoors although there are quite a lot of indoor/hi-tech base missions too. It doesn't matter one bit - terrain design is fantastic and very detailed. Trees swing in the wind and the levels are filled with sounds (nothing beats drops of rain on a metallic roof). Just too bad that the game fails in many of its indoor areas. The "shopping center" in Moscow looks dull and underdetailed - and oh boy does its texturing suck.

Levels tend to have numerous tasks compared to Rainbow Six where it was way too often all about rescuing hostages or bugging phones. Selecting weapons is more limited than in R6 which is of course more realistic. Anti-tank weapons and demolition charges are needed in levels where you must deal with tanks or destroy something. I like the way tanks have been used in this game - although there should've been more of them. Mission fails if the guy with the anti-tank weapon dies while the tanks are still coming at you. It's a strategic addition and makes the gameplay more interesting (although you'd assume that you could just pick the weapon from a dead buddy). You can also command other teams while on the field - meaning you can draw new paths for them (in R6 games you have to do this before entering the level). This addition should definitely be introduced to Rainbow 6 games. Another gem is the ability to save your game whenever you want which is still absent in R6 games. 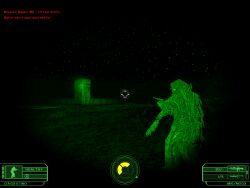 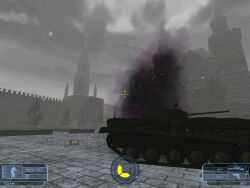 Both enemy & squad AI is pretty convincing. I had some bad memories about super-accurate enemies but this time they seemed to be absent (this seems to be more of a problem in Island Thunder mission pack). Squads are smart enough to use bushes & rocks as a cover when advancing.

Desert Siege: The better of the two mission packs (the another one - Island Thunder is set in a jungle environment). Desert Siege's missions are a bit more interesting than in the original game and there's a lot of sniping (very little indoor locations). Has some fine looking level design such as the oil refinery.

Conclusion: In spite of all the positive aspects Ghost Recon still remains a bit behind of Rainbow Six: Raven Shield. Maybe it's just the concept but I find hunting terrorists in R6's numerous exotic locations a bit more appealing. In the end - both games could learn something from each other. 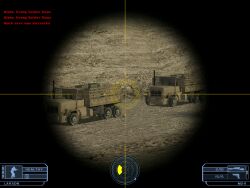 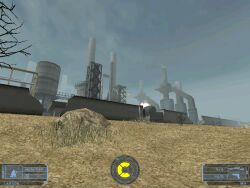