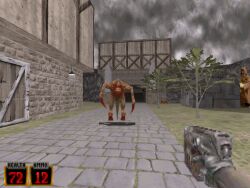 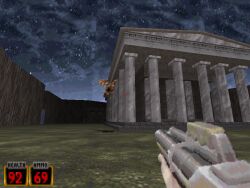 I'm now picking this thing up for the first time since the last time I gave it a try and that was when I reviewed it - years ago. I liked it back then and to my surprise - I still like it very much.

As the name might suggest "Fusion" combines elements from many great first person shooters into three brilliant episodes. There's Fiend from Quake, super-shotgun from Quake 2, evil monks (aren't they always?) from Blood, government death-squads from Half-Life and so on. Soundtrack works at times but it's not as effective as in brilliant episodes such as Oblivion 2 or Pray Your Prayers 2000.

Each of the three episodes has about six levels. The first one concentrates around Half-Life style labs, research facilities and storage areas. The overall level design is close to Quake 2 architecture with HL textures. The second episode borrows from Blood with its grim castles, villages & caves - this is the weakest episode since I'm more into present-day & hi-tech stuff. But episode 2 is still a good one. The third episode is my favorite with Redneck Rampage style countryside action and moodily lit quiet suburban streets.

The levels flow so well (apart from a few stops in the second episode) that the whole pack is finished within a few hours. I did get stuck a few times and you might even be forced to cheat since many of the puzzles are not the kind of logical puzzles we tend to see in present-day maps (there are many hidden buttons). Each episode ends with a boss fight. Enemies seem to die more easily than in Duke but you also take a bit more damage than you used to. Luckily there's enough health to keep you alive.

The overall level design and the huge amount of new stuff (there's nothing from the original Duke3D) is certainly refreshing. It has been a while since anything like this has been released. Fusion is certainly worth taking a look at and plays well with Jonof's port. 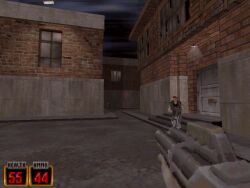 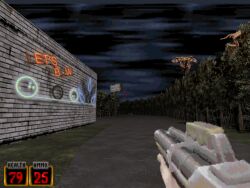