First of all I'd like to congratulate Rob Wijkstra for a very well made installation system. City Terror Gold Edition works as a standalone (you don't need Duke3D to play it). City Terror installation file is an exe file instead of zip. Launcher is very handy with options to launch CT with original levels, Fugutive levels or Christmas levels.

'Fugutive' add-on levels are better than original CT levels. Design is more complex, levels are less flat, shadows are better etc. You can break more stuff like street lamps & restaurant tables. Fugutive levels are populated by civilians. They run, they scream and they die. They're a nice addition but all that screaming gets annoying (better than quiet civilians however). Almost every original CT level had the exact same theme. Fugutive levels vary more. 'Beachside City 2' is a bit bigger than the original version and it has a lot better shadows & nature. 'Poisonville' is dark & polluted part of some city (by The Gangster from 'Premium Edition'). 'West Side' is a big sunny city with nice shadows and some nice city sceneries. 'Garden Party' is some 'silent' suburb with nice looking houses & sunny ambience. There are some other new levels as well. Level borders are marked better than they were in the original CT.

Gold Edition has three weapons with new models. They're pistol, shotgun & machinegun. Pistol & machinegun models are from Counter-Strike. They sound good & look good. However machinegun was too well hidden in some levels so most of the time battle is done with shotguns.

Gameplay is a bit difficult issue. There's no real single-player mode. Not even bots (original CT had). There are computer controlled 'bots' which are similar to bots in Premium Edition. These bots aren't original Duke bots but modified normal Duke enemies with police model & sounds. They're fun for a while but you probably won't find yourself playing against them more than once. That's why Gold Edition is recommended to be played online.

So Gold Edition is an improved version of original City Terror. Levels are a lot better and new additions are very good. Textures, sounds, coding, Fugutive levels are professional quality. Those who can play this online should download it now but others won't find that much joy from it. Levels & new additions are worth to take a look at so if you have a fast connection then get City Terror Gold Edition. 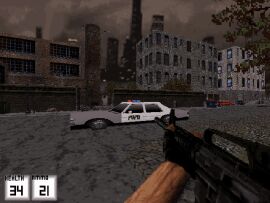 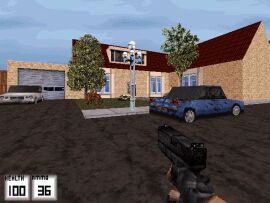