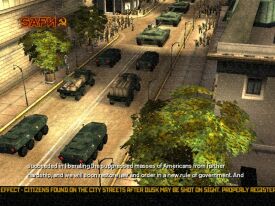 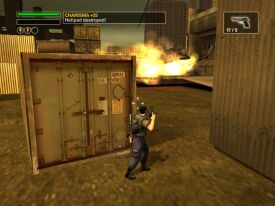 I'm not very interested in these third person shooters but this one seemed pretty okay. The storyline sounded fun and interesting, the gameplay seemed simple enough (I hate puzzles) and the reviews were mainly positive so I bought it when I found it cheap.

Freedom Fighters is set in an alternate history where the Soviet Union ended the second World War by dropping an atomic bomb to Berlin. During the following decades the Soviet machine surrounded the United States. It begins like Red Alert 2 with a massive Soviet invasion of New York City. 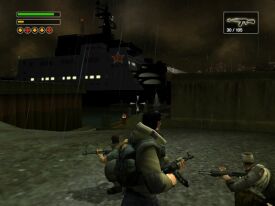 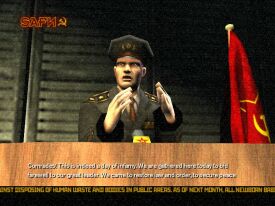 Levels are connected to each other so that, for example, taking down a helipad in one map helps by removing helicopters from another map (etc.). The thing works pretty well - you have to plan the order in which you complete the maps. You get "Charisma Points" for blowing up strategic targets and for healing/freeing your fellow New Yorkers. These points are then used to recruit other Freedom Fighters to fight alongside you. You start by having no friends at all and during the last few levels you can have up to twelve Freedom Fighters fighting beside you. I actually tend to think that this makes the gameplay easier since during the last levels you can just focus on sending your friends to combat - it works most of the time but there are moments when it's not so easy.

You can't save whenever you want. You can quicksave at sewer access holes (there are maybe 1-4 of them per map). Permanent saves (viable after quitting the game) are made between maps. One level had no save points at all which seemed a bit too difficult but in the end I only had to try it twice. This certainly forces you to make smarter decisions because repeating the same paths over and over again is not my idea of fun. Maybe a free but limited quicksave system (as seen in AvP) could have worked better? 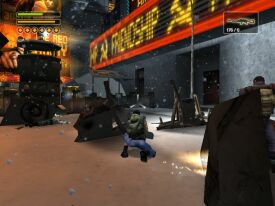 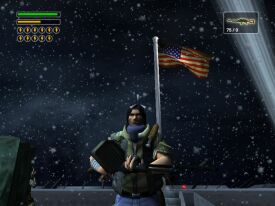 There's more than enough variety in levels and missions. There are movie theaters, newsrooms, high schools, an assassination mission, streets, Governor's Island and so on. Plus you get to experience New York City at winter. The characters have a bit of personality, the storyline progresses well (it's quite simple but at least you care) and the soundtrack is pretty good.

Conclusion: This is pretty much as good as a game like this can get. I enjoyed it for the most part and I enjoyed making the kind of decisions you don't get to do often in first person shooters. There were a few annoying moments (at least on the second skill setting) but they were fleeting. Again - worth getting if you can get it at a low price. Don't be frightened by the 3rd person view.