What a blast! F.E.A.R. breaks some old boundaries by introducing cinematic action sequences. True, this was also done in Call of Duty, but in F.E.A.R. you get to be the one pulling the strings (everything in CoD was scripted, more or less).
So, what are you in for? Some nasty experiment has gone wrong and now a naughty psychic is running free, controlling an army of clone soldiers. There are three locations: an industrial zone, a company headquarters and a research facility. Everything in the game happens during one bloody night. 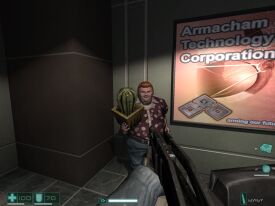 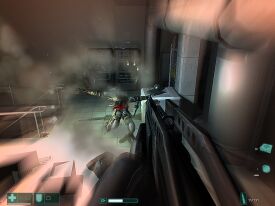 Many have compared F.E.A.R. to recent movies and it has been an issue of debate whether the game is more or less frightening than Doom 3. Neither is frightening but both games are full of tense atmosphere which makes you expect something spooky behind every corner. F.E.A.R. borrows from films (such as The Ring & Event Horizon - the game actually makes a few references to Event Horizon) in its use of scare tactics. There's a whole bunch of spooky voices, close encounters with ghosts, hallucinations, blood & guts and the little girl you all have heard about. Despite the monster closets, Doom 3 tried a bit less to be frightning - it just was thanks to its level design, use of lighting and ambient sounds. F.E.A.R. is a bit more predictable. However, both games kick ass in terms of atmosphere. 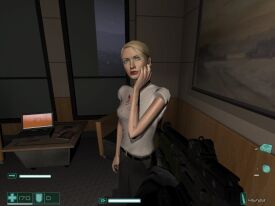 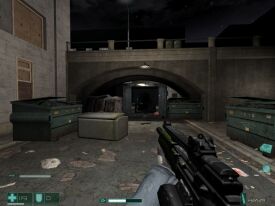 What makes F.E.A.R. such a cool game is its use of cinematic action sequences. Every fight is a cool fight. You get to use SlowMo for maybe ten seconds after which the gauge needs to reload. During SlowMo you're faster than the environment and you get to play with the enemy. Also, the enemy AI works great! The enemy is able to retreat, issue commands, throw grenades, take cover and so on. Plus hitting enemies actually degrades their ability to fight.
You can carry only three weapons at a time and there are maybe ten or so weapons available. So you need to think what kind of weapons you ought to carry. Also thanks Monolith for making grenades useful!

The maps have been criticized for their lack of variety and this is true but I didn't mind (usually I would). The going never got boring. Sometimes you don't get too see enemies for minutes, sometimes you fight them all the time, sometimes you're expecting a vision or a ghost to appear. Also, you get to encounter other NPCs (well, clearly this is something you should expect from a modern game) along the way. Visually the levels are stunning. You can break stuff (looks pretty in the middle of a firefight) and the graphics are awesome, mostly thanks to the use of lighting. Ambient sounds are effectively used and the soundtrack usually understands to stay in the background.

There's also a story but I'm the kind of guy who has trouble following the plot. The death of one particular character actually made me feel sad - for the first time in a computer game.

Conclusion: The neatest FPS in a long time isn't as scary as they say but it's still a highly atmospheric blast. 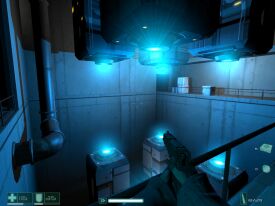 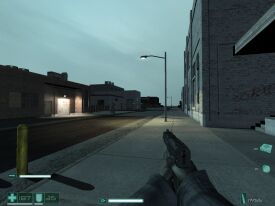