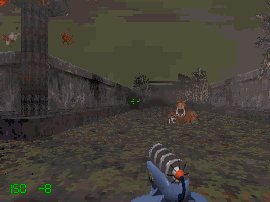 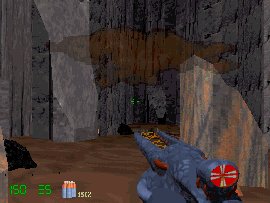 TC called 'Critical Mass' was started many years ago and back then it was one of the most known TCs ever and eagerly awaited. The mysterious disappearance of the project leader caused this TC to die. All work wasn't wasted because Vincent Civiletti still had the maps he made for the CM among with other stuff from the TC. Levels were joined together with other CM stuff and now we have 'Extreme Justice TC' which gives a picture of what Critical Mass might have looked.

-Levels:
Levels follows somekind of an alien/medieval theme. Hero ain't Duke this time but an alien who is fighting to defeat the other alien race that killed our hero's race. First two levels are not so good because design looks very old (levels were mades some years ago remember) in some places and second level has couple puzzles I could't easily pass. Third level, which is somekind of a cave, shows some quality stuff. Cave has huge areas and looks really good. Next level is a sewer and it's average stuff. Fifth level 'Swamp' is my favorite. Details are perfect and this really looks like a swamp with some fog elements and nature feel. Last level is good by design but I found it too hard.
Score 7/10

-Enemies:
Original CM TC had many new enemies but Extreme Justice uses a lot of Duke's original enemies which is a good thing. New enemies seem to be old enemies with new art - enemies doesn't seem to have anykind of con changes but that doesn't matter.
Score 6˝/10 -Weapons:
Extreme Justice has some very good weapons. Each weapon has this blue color and some weapons has cool con changes. Pistol and shotgun causes damage to you also if you shoot too close. Machinegun is a very cool one - no con changes but some cool graphics and sounds. My favorite is RPG which has been replaced with railgun-type weapon. Pipebombs are now cluster bombs with multiply explosions. Shrinker is a flamethrower which is really nice when you shoot troopers but unfortunately this doesn't affect on every enemy. Devastator has railgun- type action. Tripbombs are the old ones with new art. Freezer still freezes the enemy but when you kick it the enemy turns into a water fountain.
Score 9/10 -Other:
The way our hero speaks is funny but in a way it fits. Other sounds - especially the weapon sounds - are good. Music is the same in every level. Arts do fit in but most part of the art looks poor and old. TC also has some spell-type items but I couldn't find much use for them. There's lot more new stuff so play it.
Score 7˝/10 Lastability: Good TC but it has some poor textures and hard puzzles and some levels look old:
WWW:http://www.planetduke.com/jsbuild/
Version: 1.4, 1.5
Author: Vincent Civiletti & ex-Critical Mass team
Size: 10Mt
Score: 7