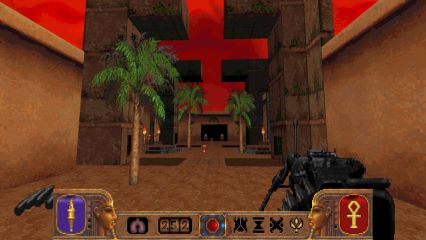 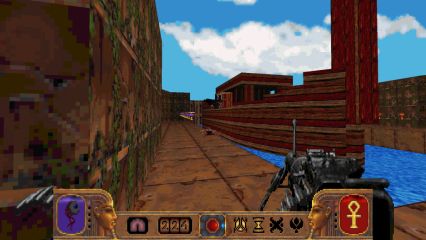 This is a Build-engine shooter I didn't even know existed until years later, probably when LAW wanted me to play a usermap (the first of its kind) he had made for the game. It's easy to see why the game with its generic hero and lame Egyptian theme failed to garner more attention in the midst of all the better-known Build shooters (not to mention Quake); upon release, Exhumed was still using a version of the Build engine that pre-dated Duke3D's.
A proper modern port was released recently, prompting me to give the game a try. From what I've read, strafing, straferunning and thus jumping are quite different from the DOS-based original, but I did my best not to sequence-break the game (apart from one early map where I reached the ending within the first minute; I couldn't really undo the error since the game saves your progress automatically and you have only one slot per playthrough). Also, I heard no music while playing, but this was no fault of the port, but due to the data file I was using; apparently there are several different versions of the game available online and I happened to pick the wrong one. This was to my detriment, as these '90s shooters really benefit from having a soundtrack. (The PCExhumed port also lacks an options menu, but you can still modify settings via a config file.)

The game confused me quite a bit at first. You have several mana-based powers (these are not permanent but provided via consumable items) that I had no idea what they did. Guides on gamefaqs seemed to be based on the rather-different console versions of the game, and not being able to save and load at will made me reluctant to try them out. The checkpoint-based saving system itself was confusing, as initially I had no idea how it worked and was expecting a traditional system based on savescumming. I kept picking up new lives, but had no idea how many of them I had in total or if they made any difference. (They do make a difference; if you run out of lives, you start at the beginning of a map rather than at the previous checkpoint.) To be sure, once I figured out how the system worked, I kinda liked it, especially since savescumming is something I've really grown to despise in recent years. But here's the catch; when you respawn at a checkpoint, the state of the world remains the same as at the moment of your death, meaning all the enemies you killed remain dead, so that the only penalty (unless you run out of lives completely) is having to make your way back to where you were. Still, the system does manage to create at least a bit of tension, which is something that's completely lacking in all other '90s shooters. 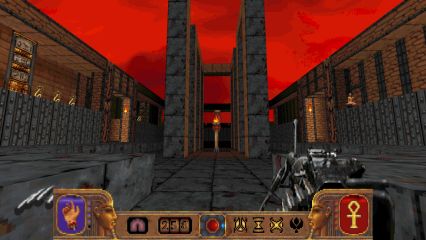 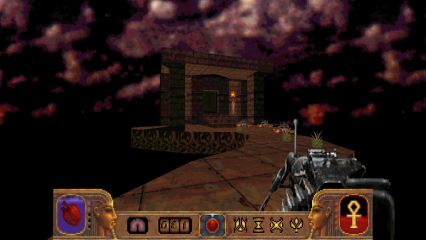 The Egyptian theme makes for a generic level selection, as it's ultimately just a collection of various temples, caves and waterways (all displayed nicely on an overhead map ŕ la Doom); this is one of those games where it's hard to remember individual maps afterwards, which is something you don't expect from a Build-engine game (well, maybe Blood). Despite the lackluster theme, the levels still look pretty good. The mappers make good use of various traps and moving sectors, while texturing and lighting remain noticeably competent throughout. Egyptian assets have been put to good use, and there are some pretty views of temples against red backdrops. The layouts can be a bit confusing, but they still seem well thought-out rather than just an incoherent sequence of rooms and corridors. There are lots of moving walls and platforms; maybe even too much, as it seems that the temples have a life of their own the player is trying to figure out - this probably makes sense considering the theme, but it sure can throw you off. There are no sloped surfaces, but this too makes a lot of sense as you wouldn't expect to see many slopes in an Egyptian temple. All in all, the mappers made a hell of a job within the constraints of the theme and technical limitations of the era.

Gameplay isn't bad, just kinda dull. There's one weapon that's clearly better than the rest (the machinegun), while the others are situational (and the grenade takes a lot of getting used to). Moreover, while the game's combat is somewhat satisfying thanks to punchy sound effects and the way the enemy reacts to getting shot, this has got to be the easiest Build-engine game out there. Maybe it's because the game wasn't balanced around strafing, but there isn't even a difficulty setting one could adjust. I died only three times in combat, and twice of those were due to gigantic (and pretty awesome) serpents that reside in lava. Most of your deaths will be due to bullshit factors. Several bits require you to have the invincibility powerup plus enough mana for it, but how could you know in advance when you're really required to use it? Otherwise you're forced to take damage from lava, falls, etc. There's also way too much jumping in this game, which feels uncomfortable due to how pitiful your jumps are (the game was obviously balanced around that, I get it), and swimming is sluggish as hell (and the less is said about fighting piranhas with the melee weapon the better). And while your foes tend to be rather inconsequential, the exception to this are wasps that inhabit the last quarter of the game in large numbers. Not only do they suffer from the same issues as other flying monsters in other Build games, the noise they make is akin to the unused "Blade Runner" flame in Duke3D in how pervasive and annoying it is. Moreover, there are only two weapons in the game that are effective against them.
The last two maps are kinda exciting to play, although not all for the good reasons. They constrain your movement and rely excessively on wasps and limited ammo; you have to be careful with your choice of a weapon here. Still, I felt most engaged to the gameplay here - at least if it weren't for the fact that you can get permanently stuck in the last map, forcing a reset (i.e., die often enough to run out of lives).

Conclusion: I had low expectations going in, expecting a clunky and an unimpressive experience. It turns out Exhumed wasn't that bad. Its level design is mostly competent, even impressive in some ways, but suffers from the limitations of its theme. Gameplay is a more mixed bag. The checkpoint-based saving system is an improvement over savescumming, but combat is rather mediocre while presenting little challenge (beyond being stingy with ammo distribution toward the end). The powers are useful, but you shouldn't be required to have them at your disposal lest you're willing to take damage. All in all, Exhumed is worth a look, but it shows its age in a way some of the other Build games don't.

(The game never had a mapping community, nor even a map editor for public distribution back in the day, but recently MetHunter, Oasiz and Daedolon released a 3-level episode for the game along with some design documentation. The episode brings out some hidden features of the engine, including sloped surfaces, and in general boasts more ambitious design than the original levels. Oasiz's opener with its massive underground cavern brings out scale in a way the original maps couldn't, while Meth's rather lengthy follow-up features every trick in the Exhumed playbook, not to mention an impressive array of well-designed locations. The base-game's boss fights were so easy that throwing all three at you in the third map is more than called for to wrap up the episode - even if the last of these bosses got stuck inside a wall. And let's not forget LAW's pioneering first-ever usermap for the game, El-Gizah. It may not have the best visuals - having been released years before any modern ports - but it makes an effort to introduce some clever puzzles and a range of locations despite its short length. Moreover, it actually dares to venture beyond the style of the original maps, with its misty atmosphere giving the map a unique touch.) 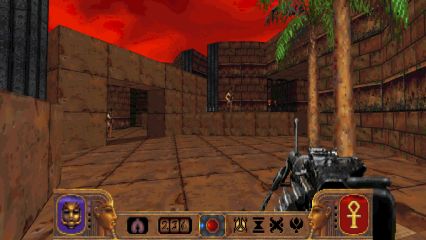 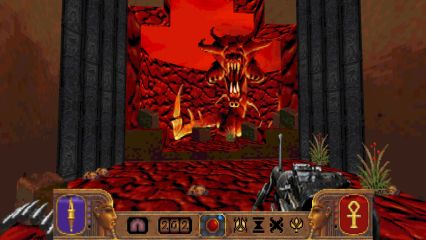