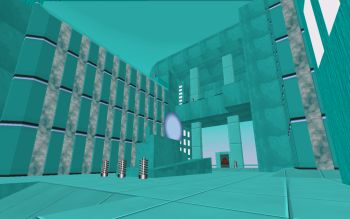 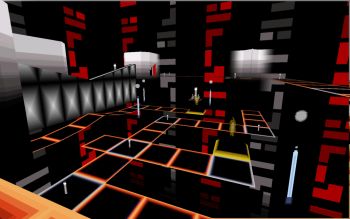 Electric Highways is another experimental standalone EDuke32 mod/game from Zykov Eddy. This time it's all about the '80s: neon colors, virtual reality, big government paranoia and electronic music. It all comes together as an "interactive concept album" where the point of each map and its corresponding music track is to convey a specific mood to the player. There are ten maps in total, worth around 30 minutes of gameplay.

Now, if you're like me, the first thing you'll notice upon hopping into the virtual world is that your vertical mouse axis is wrong and there's no apparent way to change it. Before you get frustrated and quit simply because the author omitted a feature that has been in every game of this nature since the dawn of man, I'm gonna save you some trouble: Pull down the console and type in_mouseflip 0. Now you can play.* Update: An invert mouse option was added in a patch so this issue has been rectified.

Electric Highways isn't so much a game as it is an audiovisual experience. Its puzzles are rather simple, usually a matter of finding one artifact that unlocks the last door: They're merely a convenient excuse to guide the player through sights and sounds while giving him a slight illusion of agency. There are neither enemies nor any possibility of dying: To keep the player purely focused on his surroundings the game has been effectively stripped of anything non-essential. Each map has its own visual theme (which is always rather abstract) and an accompanying soundtrack (by Xitilon) that complements that theme. The point of this fusion is to convey specific emotions. Of the ten maps some are awe-inspiring, some just good and a few are rather dull (probably intentionally so, at least up to a point): Their soundtracks usually reinforce these impressions. They're also visually so different that you're always excited to see what's next. In the long run, the concept starts to get slightly repetitive because you really aren't doing anything different from one map to another, but the game is quite short and thus doesn't really get to overstay its welcome. Check the original soundtrack here.

*(Another small technical problem is that there's something wrong with the way the game is exited: When you launch EDuke32 your Windows keyboard layout changes to USA-English. Normally it's automatically reverted back to your default setting upon exiting the program but that doesn't seem to happen with Electric Highways, so you have to revert it manually. Tested on Windows 10.)

Conclusion: Electric Highways isn't merely something that's new to Duke3D but it's also something that hasn't really been done before for any game; a soundtrack-driven experience, an electric opera if you will. It is at its best when it's epic and uplifting, but not equally successful when it's trying to be dark and downbeat. This is a bit of a shame as Eddy has put some awesomely dark stuff out in the past. Thus, it doesn't quite succeed in fully capturing the whole emotional spectrum, but it's a big step in the right direction. 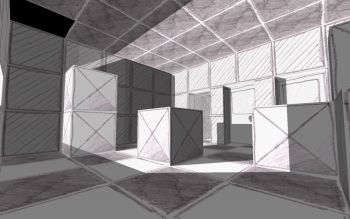 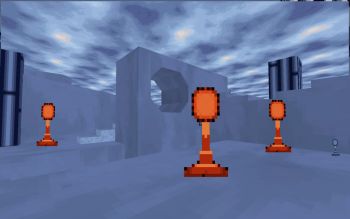