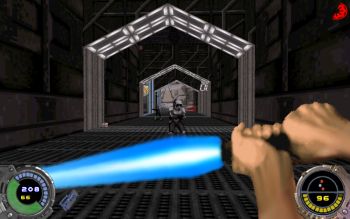 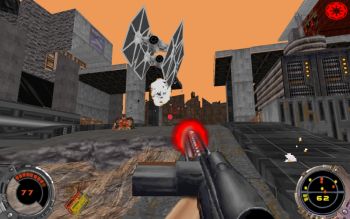 Version 2.0 review: A new version was released in spring 2017, featuring a new episode, new force powers, several other new features and many bug fixes. If you haven't played the mod at all yet, you should read the original review below; almost all of it still applies. Here are a few paragraphs about the new version:

Due to the increase in Duke's jedi prowess in the aftermath of the previous episode, Duke now has access to new force powers, most notable of these being the force choke and force heal. If you kill enough bad guys using the force, you gain access to the Emperor's lightning attack, which is good for a few easy kills. The right ingredients are there, but overall the system could be better balanced. Often you're reluctant to use the choke because it's only useful when facing very small groups of weak enemies, and even then it's clearly inferior to traditional weapons. You feel that you're much better off saving the force to heal yourself periodically, but this doesn't take you any closer to the "dark side". Considering this, the lightning attack could be a bit (if not a lot) better so as to make it worth all the trouble.

The new episode is a pretty good selection of somewhat well-known usermaps, mostly of the space variety. During the first few maps there's also an attempt to forge some kind of a logical progression between the maps with the aid of cutscenes. However, after the third map or so the episode drops any pretense of having something approaching a plot. Some maps are a poor fit, mostly due to balancing issues rather than theme. For example, Captain Massive's Moontang has a few chokepoints where intense laser spam gets you killed over and over again (in large part due to overpowered turrets, I suspect). Iggy's massive Moonbase is a dull way to wrap up the episode; not only is it a poor fit for the mod's frenetic pace (the Duke3D version is more about relaxed exploration), but most of it is pitch black, making it hard to see anything unless you keep firing your weapons. (Not to mention I spent at least 20 minutes looking for the last key lock.) While the episode can be tons of fun in short bursts, battle fatigue becomes an issue toward the end. Lessening the amount of enemy spam and introducing more story elements might do wonders to keep things more interesting.|

DeeperThought is back with another mod that focuses on raw gameplay. Duke Forces takes the original four episodes along with a usermap episode and converts them, on the fly, into Star Wars themed maps. Almost everything from textures to sound effects gets converted. However, rather than taking control of some lame jedi, you get to play as Duke who's about to discover he's just as proficient at lightsaber combat as any seasoned jedi. This entanglement of franchises entails a mishmash of enemies from both the Star Wars and Duke Nukem universes which in fact fits better than one might have expected. After all, if Duke exists in this universe, so should his enemies. His enemies have had to have come from somewhere so why not the Star Wars universe? (Whether mixing Star Wars enemies of various factions within a single map makes any sense is up to those more familiar with the lore as I couldn't tell a difference between Hoth and Endor without googling.)

With no chaingun ammo lying around, Duke ends up obtaining a whole new arsenal of weapons. These are perhaps the best thing about the mod; none feels out of place and each feels different, with both strengths and weaknesses. Only the lightsaber felt slightly overpowered but it's not a traditional melee weapon in the sense that you could use it indefinitely. Gameplay is spiced up with all kinds of new features such as ability upgrades, new inventory items—including a cool combat drone that follows you everywhere&#8212and unexpected miniboss appearances. The mod is quite a bit harder than regular Duke3D; not only do you have to get used to the new enemies and their unique attack patterns but the action has a habit of getting a bit chaotic at times. This increase in difficulty is alleviated somewhat by a "last stand" ability where, once you're down, obtaining one more kill revives you. (You should feel right at home if you've played Boringlands.) Some things such as the new jetpack (which functions more like a jump pack) and weapon key assignments take some time to get used to but there's plenty of time for that if you intend to play all five episodes.

The one thing the mod is obviously missing, so far, is what's these days known as a "story mode". There's a usermap episode consisting of hand-picked usermaps and while it's a good selection, including both city and space maps, these maps don't follow any particular storyline; it's just a series of disjoint maps. This also means that there isn't much in the way of pacing in the episode; it's just unfettered action from the getgo, which is understandable in the sense that DeeperThought's con magic is most apparent in large samples, but from a gameplay perspective one is left wanting more varied environments and those quieter moments where con trickery takes the backseat for a while. There is a rather cool opening crawl, just like in the movies, which sets the mood nicely but it has little bearing on the journey itself.

Conclusion: Duke Forces 1.1 is a promising start that stays true to both its source material and our beloved hero. The action is balanced with a fun and varied selection of new weapons and monsters but can get a bit overwhelming and repetitive at times. While the mod comes with a very generous selection of maps, we're still gonna have to wait a while for any brand new maps to start popping up. 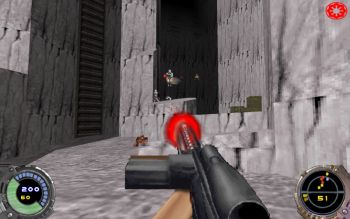 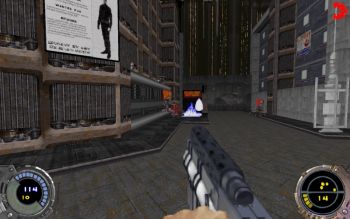