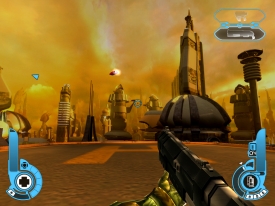 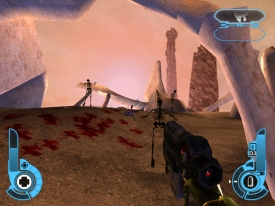 Judge Dredd: Dredd vs. Death was being sold on Steam for 1.59€ so I thought, the game must definitely be worth that. I'm not gonna make you read the rest of the review to find out that I'm NOT gonna say the game is not worth 1.59€. It definitely is worth 1.59€ even though it's still a pretty sucky game.

Which is disappointing, considering the fact that Rebellion (the developer) is the group behind Aliens vs Predator games. The game consists of Dredd tracking down four Dark Judges and completing various other tasks. The gameplay, however, is exactly the same from the beginning to the end. It doesn't take much time for the game to introduce some vampires in the first level. After this, it's time to kick some zombie butt. There are also some human enemies but vampires and zombies are the most common enemies and they're as ridiculous as they sound.

The zombies are too slow and usually there are too few of them to cause any kind of panic. To preserve bullets, which are scarce in this game, you take all the time you need to hit the zombies in the head. The vampires are a bit quicker, so you fight them by shooting while you circle strafe or move backwards. This is the recipe from level one onward and it gets very monotonic. The occasional human enemies pose no threat and the gameplay never escalates - the latter levels are just as piss-easy as the first ones.

You fight lawbreakers with your Lawgiver, a judge's weapon of choice. It features several different firing modes of which only one (rapid fire) is useful, the rest are merely to be used when you've got nothing else. (The incendiary mode sets enemies ablaze, and you'd think that after burning for a few seconds they go down but it takes a lot longer so this mode ends up being as useless as it gets.) Apart from the Lawgiver, you can carry only one weapon with you, usually a shotgun or a machinegun, which are a bit more useful but usually out of bullets. 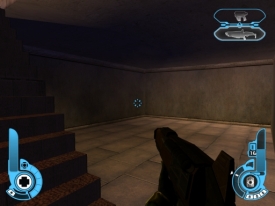 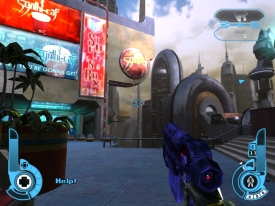 Level design is also pretty dull. A typical room consists of four walls and some pre-made models/prefabs, recycled from level to level. The second (or the third?) level is a harbor, but the only "recognizable" feature is the amount of boxes and cargo crates everywhere. There's also a shopping center map and once you've been in it for just one minute, you've practically seen everything there is to be seen since the same design is repeated throughout the map. The only "outstanding" feature in these levels are skyboxes, which compensate for the lack of artistic vision in the levels - which are supposed to represent Mega-City One of 300 million inhabitans - itself.

There are some good qualities though. The game is not graphically impressive (it's from 2003, the same year as the still visually impressive Unreal 2) but its colorful and comic-like visuals are refreshing especially to a Duke fan. There are also plenty of civilians around and you can arrest nealry all of them if you so desire, sending them to jail for such heinous crimes as smoking in public or loitering (in case you've got nothing else on them). And while the final boss turned out to be easier than anything I've ever encountered, the way you beat two of the four Dark Judges was fun in that it was more than just "shoot the fuckers". Some music bits also reminded me, at least momentarily, of the movie which, while it wasn't very good, had a good soundtrack.

Sentence: Certainly worth 1.59€ if you've got nothing better to do, just don't expect anything surprising or innovative from Dredd vs. Death. In fact, you'll probably be bored to death even though the game is only four hours long. 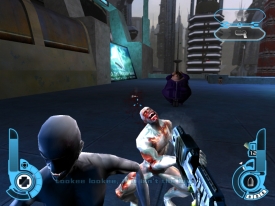 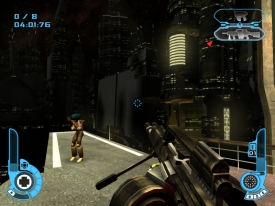