RoE continues the path of Doom 3 with the same labs, caves and monster closets. There are two new weapons: the double barreled shotgun from Doom 2 - maybe the greatest game weapon ever (and works fairly well in RoE) - and the Grabber from Half-Life 2. There's also a new artifact that can be loaded with three powers. The game is packed with 12 new levels while the original had 26. And, finally, two new enemies (of which the another one is a Duke Newbeast rip-off) and four new bosses have been spawned - oh and the old Lost Soul is back (although I kinda liked the new one). 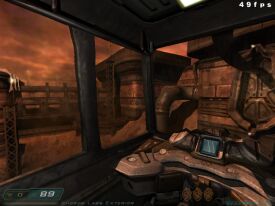 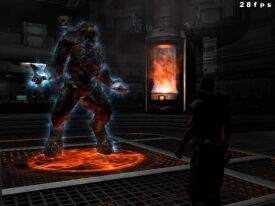 The levels stick with a familiar theme - the environment hasn't changed much but it's a bit better thanks to the fact that you spend a bit more time outside and, at least so it seems, there's a tad less time spent in labs and metallic hallways. Tram rides are always so much fun and there was a scene where you had to travel through waste tunnels in an environment suit with a limited tank for oxygen. The artifact and three of the four new bosses add a lot. Using the artifact against bosses provides a sense of strategy. The Grabber was fun for a short period of time but ends up being pretty useless (excluding the first boss fight). Rooms in this game are far too cramped and thin for the Grabber to function properly (HL2 had it so much better).
Overall atmosphere, however, is a bit lamer than that of the original game. Maybe it was the lack of PDA emails (at least I thought there were a few less of them - at least they didn't contain many audio logs) or the lack of that UAC corporate whore who speaks during the UAC info clips. Spotting his voice in the middle of chaos was something effective in the original game. Tension is not built like in the original game.

I had some framerate issues with RoE. While the original game runs smoothly on my machine (AMD 2Ghz, 1Gig, R9600 Pro) this one had some serious fps drops in certain locations (especially some of the outdoor areas).

Conclusion: A bit better - but less atmospheric and scary - levels than the original game had, good bosses (excluding the last one) and the artifact thing was pretty cool. A worthy mission pack. 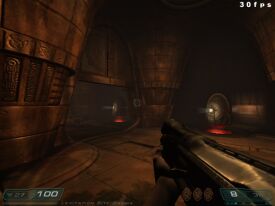 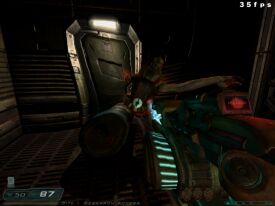