From the ashes of hell rises a new game. Carmack's devil baby - Doom 3 - retells the story of Doom with today's technology. A bunch of people have shown their dislike toward it (including a bunch of HL2 fanboys) and many have completely missed the whole point of the game.

I'd like to congratulate Id for another great graphics & game engine. I had no problems running Doom 3 on my Millennium Edition operated system after making a few changes to Doom3.exe file with a hex editor. With high-quality settings the game plays 'smoothly' (fps being around 25-40 all the time) with 2Ghz, 512Ram & Radeon 9600 Pro.

It's not really the texture quality which makes it look good - in fact even the very old Unreal has better quality textures than this one. But with tons of details & excellent lightning the final look of the game is incredible.

Levels are excellent. Many have - including me - complained that they start repeating themselves. Lab after lab, tunnel after tunnel - but you can't expect much from a base in Mars. And right when you get tired of the similarity between locations something new is being thrown at you - whether it's a nice refreshing train ride, a visit to outside or an introduction of a new enemy. My two complaints - there should have been more outdoor visits and there should have been one Hell level more.

Enemies & weapons are almost all from other Doom games - but these remakes kick ass. You won't experience the kind of mass-murder scenes you had back in Doom 2 but at least I didn't miss that. These new monsters force you to respect them. They are smart and they have personality. My only complaint - there were far too less Bull Demons & Mancubuses.
The weapons are pretty well balanced - even the pistol is useful. I played Doom 3 with medium skill level and at times the bullets were badly running out - to spare some you had to use pistol on Zombies & other less-fatal creatures (such as Trites). My only complaint - the grenade.

But what really makes Doom 3 is its scary atmosphere. You won't have much of it if you play the game with a bunch of friends watching in the middle of a day. But here's my tip: Wait until it's dark & silent, turn off the lights & put on your headphones. Monster spawning/appearing from a secret 'closet' right behind you style attempts to scare you get old after a while but with the excellent use of ambient sounds & creepy voices the game manages to hold its atmosphere right to the end of it.
Plus unlike in previous Dooms this one actually has a 'strong' storyline. It's pretty much like the one in Half-Life. You arrive, you take a look at the facility, an experiment goes wrong and all hell breaks loose (literally). The story gets deeper and deeper with the help of other survivals & your personal PDA (with audio/video logs & user emails).

One more thing: Doom 3 is pretty long. It's not tough (unless you count in the 'scary factor' which makes it feel challenging at times) - not even on medium skill level - and it's pretty impossible to get lost (although I admit I had to check online walkthroughs a few times) - but it's still pretty damn enjoyable and you can't just 'run through' the levels.

Final word: Well worth your fifty dollars/euros. If you downloaded Doom 3 - Congratulations - you're a commie and you don't deserve this game. 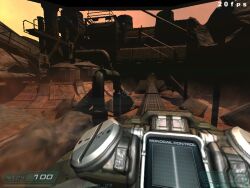 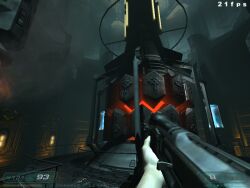