DUKE NUKEM CITY CRACKDOWN TC DEMO BY DNCC TEAM For some time I thought this was another 'dead & buried' TC - and I was about half right. What we have here now after three years of wait is one completed level, two uncompleted levels & some new stuff. Sounds like nothing ESPECIALLY when the first level has already been released a long time ago ('LARockzr' which is available here too naturally). So the first level is a good city level and second level is a city level too. It's some less bright & happy part of a city which has no exit (unless you use DNCLIP which you will use if you wish to move forward). This second location is very small because it's a lot uncompleted. Third level isn't even a level - neither enemies nor anything else. New weapons are pistol, shotgun & machinegun. They all look good (pistol being ripped from new Wolfenstein) - especially shotgun & machinegun. They're also more powerful. New art & sounds are a bit above average. I don't play Duke midi anymore because my soundcard makes it sound stupid so that's about it.

There has been some really good shots available at the DNCC site for three years. I really don't understand the point of this 'test' (after the first release of first Quake everyone has been so eager to use this 'test' word in their demo releases - hell even I used it when I released a demo of my DT TC) release. It has one good level, one good looking start for another level and a third - even less than a start for a third level, some guns & sounds. Didn't author had any time to even complete these two levels after working three years with this TC?

What there is - looks good - but everything seems to move so damn slowly. And you can find even more lazy stuff when you find out that the files aren't even in a .GRP file. I can't give this one a score because it's not even a demo. 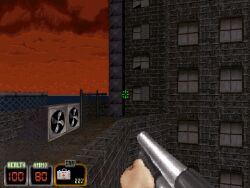 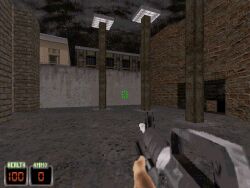