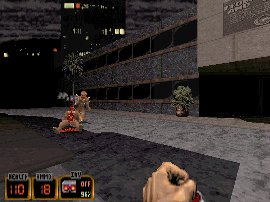 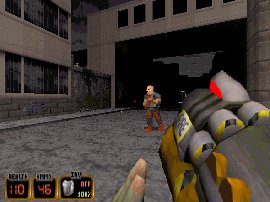 -Levels:
This TC's got four episodes and about five levels on each. Some levels
are too difficult and maybe a bit too boring too but some levels in second
episode (mancubus.map) are pretty good. These levels has some Shadow warrior,
Duke and Doom style levels. Well, but too much not so good levels :-(
Score 7/10

-Enemies:
I was really satisfied with the enemies. Maybe too many enemies in some
levels but it doesn't bother much. All enemies are from Doom and Doom 2.
Funniest enemies were Imps (replaces assault troopers). It was nice to see
Imps flying like troops.
Score 9/10 -Weapons:
All weapons replaced by other weapons. Weapon like Uzi is from the Shadow Warrior
and weapons like Plasma cannon and Rocket launcher from the Doom. My favorites were
Uzi and Double barrel shotgun. Almost all the other weapons were too huge for the screen.
BFG9000 was really nice weapon. What I really hated was that biiiig minigun!
Score 6/10 -Other:
Music themes were very good and sound effects too. All textures were taken from
Shadow Warrior and Doom
Score 8/10 Lastability: Couple good levels and all the enemies saved this TC from my trashcan:
WWW:http://www.fileplanet.com/index.asp?section=505
Version: 1.4 and 1.5
Author: BDP community and oddeye
Size: 7.79Mt
Score: 7½/10