CrackDown is reminiscent of those several "special forces" themed Total Conversions that were being worked on back in the days when kids still used to play with sticks & stones. Of course these TCs were constrained by the lack of a Duke3D source code whileas this little mod is not so expect some cool new features. The premise is simple: A city has been taken over by terrorists. Your job is to kill everyone and escort a hostage to safety.

There's just one new map and that map is very straightforward action with clear layout and no puzzles apart from having to navigate your way from one room to another. The map is a traditional (in the contemporary usermap sense) type of Duke3D city map with heavy emphasis on trimming and texturing. (In fact, the map would easily make a great Duke3D usermap.) Being a mod, the gameplay mechanics are a bit different which is the source of some annoyances. The enemies are probably visiting from the first Rainbow Six game, wielding hitscan weapons that hit you before you finish saying "cat" and having reaction times far above those of the L.A.R.D. rank & file. Some standard medkits are also unnecessarily dealt as manually operable versions which doesn't help the "running out of health fast" problem. One thing I noticed is that while I usually keep the autorun function on, I had to turn it off here to avoid getting hit by walls: the map is slightly cramped for hitscan-only enemies. (Another thing I had to turn off was the music, but that's a matter of taste.) Your weapons pack a lot of firepower and graphically they fit in nicely with the mod's overall look. All in all, CracDown is a nice little mod that looks better than it plays. 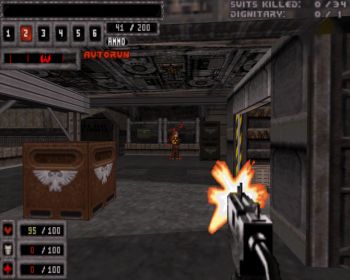 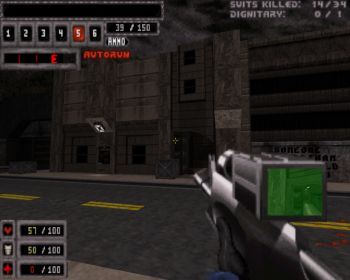