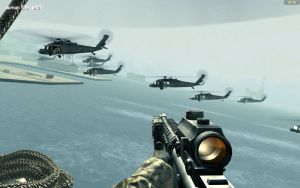 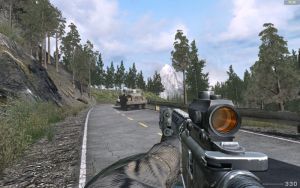 Here's the game that changed the entertainment industry, made online war trendy and went on to sell more than 10 million copies. What's welcome about Call of Duty 4 is the switch from the "done to death" WW2 theme to, well, Modern Warfare. Too bad hardly anything else has changed. To get an idea of what the gameplay is like just read my review of Call of Duty 2. What was wrong with the gameplay there applies here as well. The single-player campaign is about four hours long which is just about enough. You'd think that such a short campaign is up for a replay soon but this game only gets worse with more replays because the experience is exactly the same every time. The boring campaign has two highlights: the long stealth mission in Pripyat and the AC130 mission where you get to play god by providing air support from an invincible air fortress. There's also a fun bonus mission after the credits and what would a CoD game be without some cool cinematic scenes (this time including nukes taking and going off)? 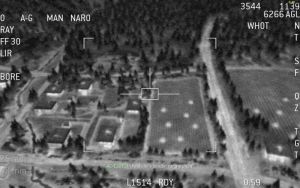 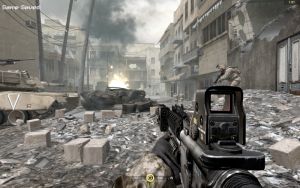 The multiplayer mode is slightly better than the single-player campaign, relying on fast-paced combat and tons of challenges and unlocks. The Free For All and Team DM modes are basically oldskool deathmatch and once you have unlocked everything and ranked up to level 55 (the highest rank) the game loses its appeal. Like the single-player campaign, the multiplayer mode is one big ADHD fest. You're rewarded for lucky spawns, lucky grenades and shooting through walls. The maps are too small the accommodate the kinds of player numbers you usually see on populated servers, resulting in an increased amount of contacts. More often than not you're killed by someone you never even saw. Luckily, thanks to the availability of dedicated servers, two potential game killers have been effectively banned: noobtubing (i.e., using the grenade launcher) and the martyrdom (a dying player leaves a grenade behind) & last stand (a dying player pulls out his handgun before succumbing to his wounds) "perks" (character attributes).

Staying in one place usually gets you killed so the game is closer to Quake than, say, Counter-Strike despite the realistic setting as opposed to the fantasy world of Quake. At its worst you're constantly dying from bullets shot through walls, lucky grenades thrown from across the map that land right before your feet and airstrikes, which are available to anyone reaching a killstreak of 5. The killstreak system is pretty nifty: Three kills in a row nets you a UAV overflight which exposes enemy locations. You can then use this to your advantage to get the airstrike. For 7 frags you get a chopper which patrols the map for about a minute (unless shot down). Of course, it's not so nifty when you're in the receiving end of someone else's streak. There are other modes besides the deathmatch modes such as headquarters assault and domination modes but camping tends to be higher in these maps. However, if you're not so much into the ADHD fest of the deathmatch modes then you might wanna take a look at these alternatives.

Conclusion: Thanks to its tedious, repetitive gameplay, the single-player campaign is essentially a one-shot type of thing. Once it's over, you never wanna play it again despite its short duration. The multiplayer mode may hold your interest up until you've unlocked everything there is to be unlocked and gained the maximum rank. It's perfect if you're into fast-paced, repetitive deathmatch but this hectic, almost random nature works against keeping you interested for extended periods. 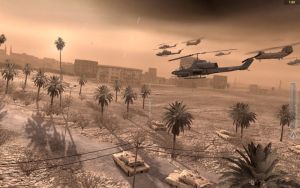 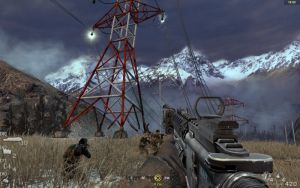 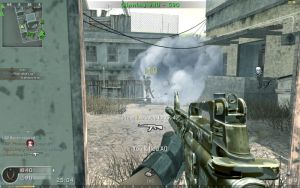 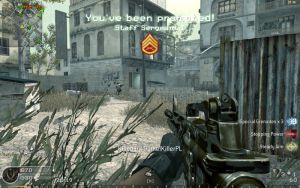