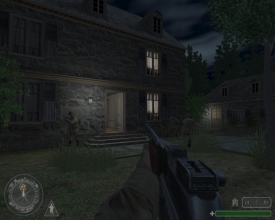 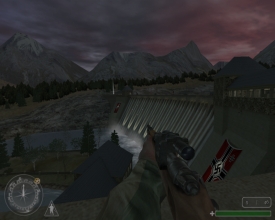 A couple of years after a wave of Doom clones came Rainbow Six and its clones, introducing the genre of realistic military shooters. Then came "realistic" military shooters such as Medal of Honor, a game with a realistic setting (locations, guns, background etc.) but Doom-like gameplay. Call of Duty is practically a sequel to MoH:AA (both use id Tech 3/Q3A engine) but with a cinematic flavor. If Allied Assault was somewhat inspired by Saving Private Ryan, Call of Duty borrows quite a few things from Band of Brothers.

As suggested, apart from the overall setting, the game is as far from realism as Doom is. Every rifle shot hits the target no matter where you are or whether you're standing, crouching or lying on the ground. There are medkits lying around, a real blast from the past considering the health regeneration systems in today's games.

There's quite a bit of variety. The game is divided equally between American, British and Soviet campaigns, so you get to see plenty of war-torn Europe, from Stalingrad to the skies over Holland. Every once in a while you have a chance to drive a tank, use an AA gun to shoot down enemy fighters or help keep the nazi scum at bay while a fellow trooper is trying to concentrate on driving a car. 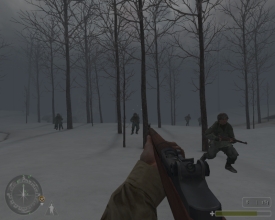 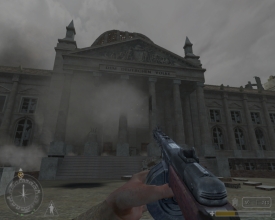 Gameplay is modest fun with plenty of easy kills and smooth progress. This can change if the game gets stuck somewhere so that it's you on one side and the enemy on the other, each taking turns shooting at each other. This can happen if you're too careful. Usually it's better to keep on moving rather than get stuck shooting at respawning nazis of which there can be a lot. Some of the levels are downright ridiculous in this respect. For example, in one Soviet mission (and one American mission in United Offensive) you have to defend an apartment building/chateau from incoming Nazis. You single-handedly kill dozens of Krauts, including a couple of tanks. Sometimes the game just doesn't know when to stop.

Compared to MoH:AA, you usually have plenty of comrades fighting by your side. However, these guys are scripted, meaning you have no control over their actions. Depending on them is out of the question as they often cannot even take down a single Nazi standing just a few meters away. Like plenty of things in this game, these guys are there just for the show.

United Offensive, the first and only mission pack for Call of Duty, is a considerable improvement. Even though there are only 13 missions (against 26 in the original), the pack actually took me more time to finish than the original. The levels are larger, graphically more intense (including huge outdoor areas with weather effects; pretty well for a game running on id Tech 3) and the multiplayer mode borrows a few things from Battlefield such as drivable vehicles and huge outdoor maps. Only the last few Soviet maps went downhill after such a promising start and the British air battle map felt a bit stretched.

Conclusion: In small doses Call of Duty is a fun, cinematic game whileas in the long run it can get exhausting and tedious. Luckily the game is not very long. Both the main game and the mission pack take around four hours, which surprisingly is more than enough. 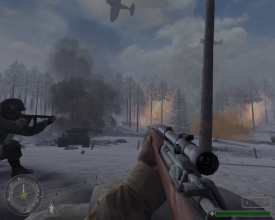 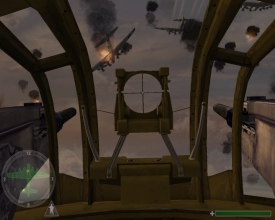 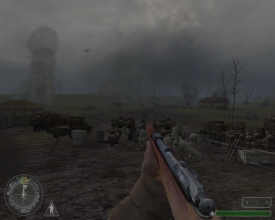 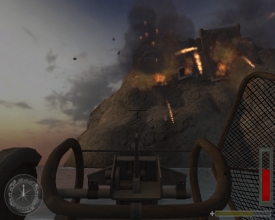