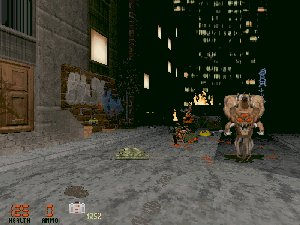 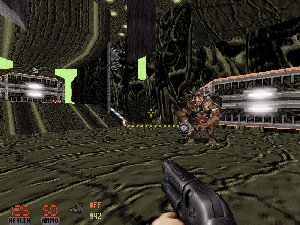 After long wait (I waited this TC more than SST TC) it's finally here. Sequel to 'Last Reaction & Water Bases' TC is here. 'Chimera' adds one more episode to this wonderful TC. Anyway author ran out of inspiration so Chimera was released as unfinished.

-Levels:
Original Chimera was supposed to include elevel levels but unfortunately this unfinished version has only seven levels. Anyway lets take a look at them: 'Twilight for the drones' is the first level. This base style map is based on EAF's base (earth attack forces). Design is very much the same as original Duke but with better puzzles (and much more darker). 'Frozen' is a cave level (ice cave) with lots of running around and returning things and again it's very dark. Not very impressive level (but snow is nice to see falling from the sky in one point). 'Green Crystals' is the smallest level in Chimera. It has good puzzles and nice design (but it lacks in shadows). Nice small map. 'Mountain Labs' is fourth level and again in base style. Very nice wall texturing and good atmosphere. Lots of puzzles and good stuff. 'Natural Carnage' is outside area level with lots of beatiful canyons and plants. Like E1l5 in original Duke but much better. 'The mother base' is very challenging level. It has tons of enemies and nicely designed places. Best ever alien hive level in Duke. It's big. 'Big city nights' is the last level in the episode. Theme is city which it uses very well. There are gas stations, bars, construction yards etc. Unfortunately nukebutton isn't working so the ending is quite lame (and where's that new boss which was meant to be in TC?). Anyway levels should be more bright 'cause they are too dark now.
Score 9/10

-Enemies:
Chimera has two new enemies and all the new enemies from Last Reaction TC. These new yellow aliens are almost like those creatures in Alien movies. When you shoot them they shoot back. Second enemy is rocket turret which is used only once. There are lots of well coded and drawn enemies too from Last Reaction plus some modified enemies but to know them read 'Last Reaction & Water Bases' TC review in section 'TC Reviews'. Rating includes LR & WB enemies too.
Score 10/10 -Weapons:
This has some really nice stuff. Pistol, Chaingun, RPG, Shrinker, Expander and Devastator has been replaced (art only). New weapon art looks very good but I was hoping con changes too. And where's the sound from Chaingun?
Score 8/10 -Other:
Chimera also has tons of new beatiful textures from new skies to water and plants. George really knows how to draw pictures. Full version was supposed to include animation (for ending and start) but they aren't included to this unfinished version. New musics are made by the author itself, Cyborg, and one is by Madonna. So soundtrack is very good. Lots of other stuff too.
Score 10/10 Lastability: It isn't the best TC because Chimera was released as unfinished and with bad ending:
WWW:http://www.fileplanet.com/index.asp?section=505
Version: 1.4, 1.5
Author: George W. Bernard
Size: 7Mt
Score: 9 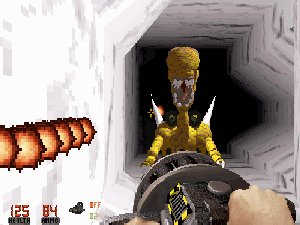 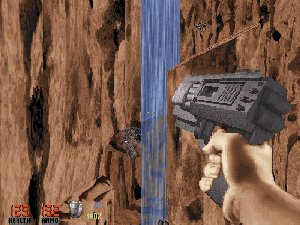